by The Budget Beauty Babe
There's been a lot of excitement surrounding budget cosmetic company E.l.f.’s new line of mineral makeup - and many requests for us here at the Budget Babe to review it and let you all know what we think! So here goes: There is quite a price difference between a new starter kit from E.l.f. and a starter kit from Bare Escentuals—about $40.00 worth of difference, and yet, I find myself quoting an old saying, "You get what you pay for…" 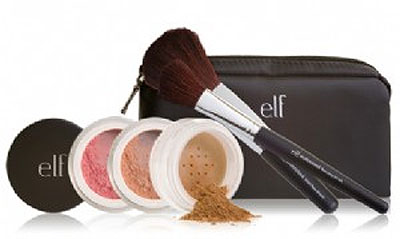 Let me start off by saying that I was really excited about trying out this set from E.l.f.- I’ve found that their products are hit and miss (awesome nail polish, vile bath products) and so I couldn’t wait to see where this mineral makeup would land.

After giving them a good, fair try I’ve decided that they fall more into the miss category, with a pretty firm belief that if you committed to this product you would end up spending much more money in the long run then if you had committed to a higher end product the first time around. Not to mention I don’t think you’ll be happy with what you see.

The set as-is is a total waste of money. For twenty bucks you get three jars, all the same size, (one concealer, one foundation, and one blush) two brushes, and a makeup bag. For the sake of my arguments I’m going to be using the standard of mineral makeups as my comparison (more specifically the Bare Escentuals starter kit).

A general look-over and testing will show the basic flaws of this set right away. The brushes are complete garbage; there is no way you can apply this makeup using the brushes they provide (in fact to even test the makeup itself I had to use the brushes from the Bare Escentuals kit, to see if you order the makeup separately would it be worthwhile). They’re poorly made, way too large, and release hairs onto your face. Another obvious drawback is the fact that all the containers are the same size. I seriously doubt that you’ll need equal amounts of foundation, concealer and blush. It would seem a lot more logical to have a larger foundation, smaller concealer, and even smaller blush (which is what you find in the Bare Escentuals set).

However, the reason for this is quickly apparent when you take a look at the ingredient lists. I’m going to compare foundations. Bare Escentuals contains 4 ingredients. E.l.f. contains 8. Three of the four extra ingredients are not minerals. Which leads me to ask why is this called 100% mineral makeup? Just so you know, the three non-mineral ingredients are Tocopheryl Acetate, which is a form of powdered vitamin E which is absorbed into the skin and used as a moisturizer, Caprylyl Glycol which is a chemical alcohol ester used as an antibacterial agent, and Silk Powder which is made from ground up silk worm cocoons and is used as a moisture seal. Ok, so you’re thinking what’s the big deal? Who cares if they add something else? Isn’t it ok as long as you’re getting the original same 4 important ingredients? Uh… you’re not. The most important of the four ingredients, iron oxides, is what gives the sunscreen minerals (the Titanium Dioxide more specifically) the pigmentation they need to actually cover blemishes and act like makeup. Without the only minerals on the list that are colored, what are you getting? Let me explain.