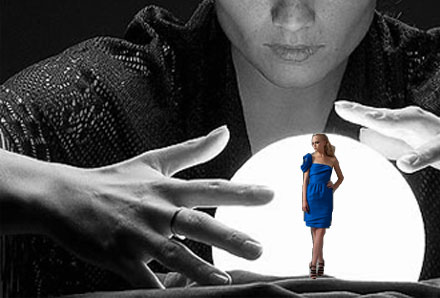 It's becoming a tradition here at The Budget Babe to look into the future at the start of the New Year, and try and predict which way the sartorial winds will blow. Last time this year, I accurately predicted that Rodarte would collaborate with Target (pats self on back), so let's see what the crystal ball holds for us this year. If only I could predict something a bit more useful, like the lottery…

BB's Purely Suppositional Fashion Predictions for 2010:
1. Prabal Gurung will team up with Target for Go International.
2. Diane Von Furstenberg will team up with Target Designer Collaborations.
3. Forever 21 will launch a clothing recycling program.
4. Boyfriend blazers (and cardigans and jeans) will get a break.
5. Mobile coupons will catch on as will other money-saving smartphone apps in a big, big way.
6. Matt & Nat will create a vegan line of accessories for Target (or Payless).
7. Celebrity fashion lines will continue to proliferate.
8. Plus-size models will finally gain more exposure.
9. Isaac will return to Target (wishful thinking.)
10. Sarah Jessica Parker will relaunch Bitten with JCPenney or Kohls.

What would YOU like to see happen in the world of fashion in 2010?

You're definitely right about this. Leave it to me to comment on the geekiest thing on your list