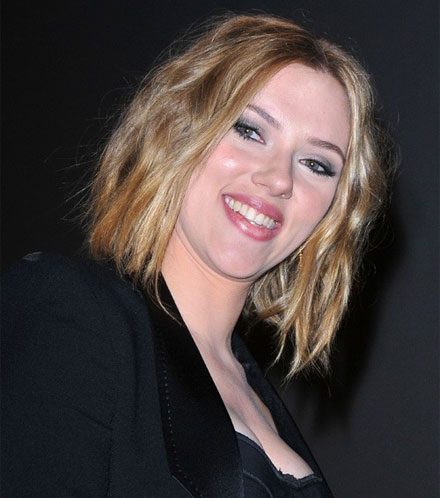 Scarlett Johansson showed off a new 'do created by iconic hairstylist Oribe at the 2010 Comic Con convention in San Diego. Get the look with styling tips from Oribe himself, after the jump!

On Oribe's inspiration for the cut:
It's a combination of Brigitte Bardot in the front and '90s-style Christy Turlington at the bottom. The cut was about going lighter for the summer.

On achieving the cut:
This haircut has a lot of versatility. It's very modern, a medium-length to longer bob, cut in a really jagged line at the bottom. We kept the good parts of Scarlett's longer hair - the softer ends - and took length off the back. The cut isn't super-angled, and it isn't incredibly severe. It isn't tapered like crazy in the back, it is softer and more wearable. It doesn't take a certain type of face shape to pull it off.

In terms of length, the style should be closer to the collarbone in front, not at chin level. The hair should be left long enough to put up.

On styling the cut:
There are a million directions you can take with this haircut - it's not your typical bob. Keep the cut below the chin for more versatility. Scarlett's hair was photographed in more of a natural state, but you can do so much with this style.

Oribe Gel Sérum is great if you want a straighter blowout, or Oribe Soft Lacquer Heat Styling Spray can help if you want to curl the hair with maximum shine for more of a retro style. Oribe Dry Texturizing Spray works if you want extra texture and lift at the roots.

You can add volume to the hair, part it on the side, style it in a Brigitte Bardot updo, keep it a bit rougher and edgier by emphasizing the layers, let it keep its natural texture.slight changes can make the hair look completely different.