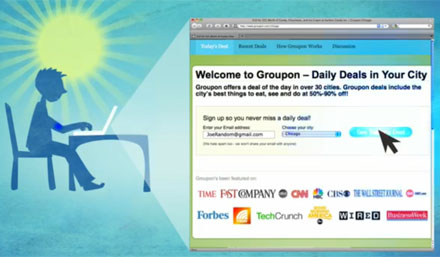 The cool new way to save money on everything from meals at a hot restaurant to gym memberships and travel is with collective buying power, and sites like Groupon.com and LivingSocial.com are leading the way in offering customers the best deals.

Groupon, for example, offers a new deal each day geotargeting consumers based on their location. (Some are nationwide, like the infamous $25 voucher that let shoppers buy $50 worth of merchandise at the Gap.) If enough people sign up for the deal, it goes live. You can recommend the deals to friends and family to ensure enough people opt in, which is especially useful in smaller cities. If not, the deal falls through and your credit card isn't charged.


I haven't personally taken part in any Groupon deals yet (Connecticut is a little slow on the draw), but I have friends in cities such as Chicago (where Groupon began), New York City, and San Fransisco who love taking advantage of Groupon deals, especially with the convenience of social-buying smartphone apps, like Groupon Mobile. The lure of Groupon's unique deals—like saving $25 off a $75 meal or getting 8 yoga classes for the price of 4—is that they encourage urbanites to get out there and explore their cities in ways they might not otherwise do.

Groupon recently turned down a $6 billion dollar deal from Google, so you know this money-saving trend is hot and here to stay, at least for now. And Groupon's number one competitor, LivingSocial.com, recently received a $183 million investment led by Amazon.com Inc. to help them overtake their rival. Hmmm…wonder if they're hiring…

Are you a Groupon.com or LivingSocial.com user? If so, what's the best deal you've gotten? Do you think daily deal group-buying sites are the wave of the future?


Groupon At A Glance:
1. Each day Groupon features something cool to do at a discounted price.
2. The offer only goes live if enough people join that day, a big incentive to invite your friends!
3. Print the voucher or bring it up on your mobile device, then present it at the business to get your deal. Read the fine print so you know how long a deal's valid.

Who Uses Groupon:
- Target audience is socially active, both online and off.
- 50 percent go out twice a week or more
- Habitual users of Facebook, Twitter, blogs, and other social media tools
- Savvy online shoppers

Posted in: Ask BB, BB's Weekly Link Round Up, Sales

Previous Post Next Post
Comments
I LOVE GROUPON!!!! I get both the living social and groupon e-mails daily. I also get the kbgdeals e-mail daily as well. A couple of months ago they offered $4 movie tickets to any amc theater in the Bay area. (what a steal?!? for a normally priced $10.75 ticket!) Another website for daily deals is doubletakedeals.com, which is primarily for the PA/MD area but is supposed to be going nation wide come January.
#1 Vanessa (Homepage) on 2010-12-09 19:01 (Reply)
I generally use LivingSocial, and one of the best ones was 5 gourmet meals delivered to your house for $25. Pretty sweet! I like it a lot because there are just so many places I don't know about in my own city!!
#2 Izalika on 2010-12-09 23:33 (Reply)
I use Groupon and LivingSocial too! I’m working w/ Schick Quattro for Women®. How about a coupon for Schick to save on disposable razors? Visit http://bit.ly/get2off to get $2 off Schick disposable razors!
#3 Jin (Homepage) on 2010-12-10 13:52 (Reply)
My sister is the one who got me started on both Groupon and Living social, I have found amazing deals on restaurants and kid's activites for my 3 yr old.. I love it! I look forward to see what deal they have everyday. Plus, I am signed up to 2 different locations, the city I like in, and the suburb my parents live in so I can take advantage of both deals!
#4 Nora on 2010-12-10 16:52 (Reply)
I use both groupon and livingsocial! I get a lot of the manicures on there and anytime there's a massage I can get to easily I snatch it up. So wonderful!
#5 Justine on 2010-12-14 15:46 (Reply)
I LOVE groupon, the best one I've used so far was $50 for a 30 min facial, 30 min massage AND a pedi at the Aveda salon/spa in Anaheim, CA... I also use bloomspot and freshguide here in Southern California.
#6 Claudia on 2010-12-29 13:58 (Reply)
Leave a comment