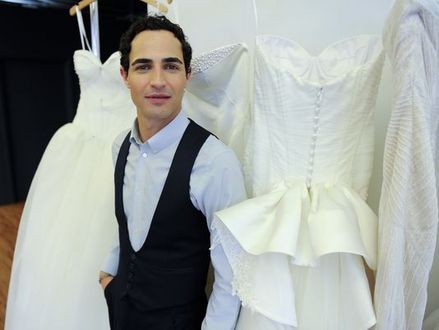 Zac Posen is teaming up with David's Bridal to create a collection of budget-friendly wedding gowns called Truly Zac Posen. The six-gown collection called goes on sale online and in 50 stores February 2014. Prices for the gowns will range from $850 to $1,350, in sizes 0 to 26.

Expect to see elements of the designer's sartorial signatures, including figure-flattering corsetry and pintucked, herringbone-like seaming.

Five social occasion dresses, in neutrals and one lavender-threaded silvery jacquard print, will also be part of the collection and will sell for $195 to $225.

Zac joins the ranks of Vera Wang who as you know has had a line of affordable wedding gowns with David's Bridal called White by Vera Wang for 2 years now. If Zac's collection is anything like Vera's (that is - AMAZING!) then brides on a budget around the country will be in for a real treat.

I can't wait to see this collection in person. I really love Zac Posen - not that I know him personally, but things like observing him backstage at one of his shows during New York Fashion Week and watching him as a judge on Project Runway have given me an appreciation for his intellect and genuine personality. I expect he'll put a lot of thought and craftsmanship into his collection for David's Bridal, just as Vera Wang has done with hers. David's Bridal's designer collabs have been very hands-on - they don't just slap a designer's name on some generic gowns - so I'm very excited to see what Truly Zac Posen will bring.