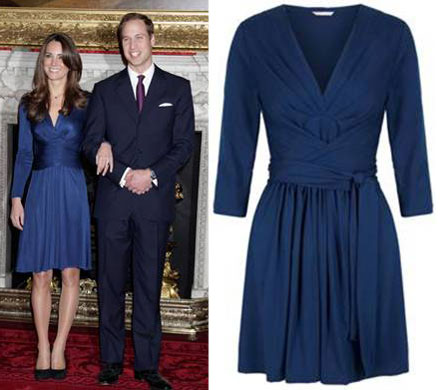 Banana Republic is teaming up with Issa London on a capsule collection that will include the ultimate royal "look for less" - namely, a version of Kate Middleton's iconic blue silk wrap-style dress that will sell for $130 (the original cost $575, which didn't prevent throngs of women from scooping up the dress after the Duchess of Cambridge donned hers for the royal engagement announcement in November 2010.)

Of course, there's more to the Issa London for Banana Republic collection, which will debut in stores and online August 8, 2013. The nearly 40-piece collection includes apparel and accessories in Issa London’s signature figure flattering silhouettes that are "bold, yet tastefully refined."

With the eyes of the world fixed on the royal birth (any day now!) I think there will be a renewed interest in the blue wrap dress and wouldn't be surprised if the BR version sells out as quickly as the original. Are you looking forward to this collab?

Previous Post Next Post
Comments
That will be in my shopping cart! AH! So exciting!!
Thinking about you & sweet baby!