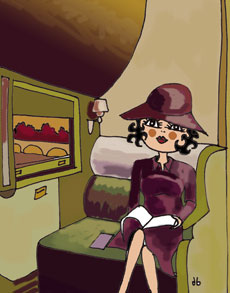 In case you're still trying to figure out where to spend your summer vacation, The Budget Babe's International Travel Advisor Fifi LaMode (an alias) shares 7 places to see before you die.

by Fifi LaMode
Throughout the years, I've discovered a few places which literally take your breath away. Here are my favorites, in no particular order:

1. Egypt
If there's one place you should see, it's Egypt. After seeing countless photos of the Sphinx and Pyramids, I was still speechless when I gazed upon them in real life. Add to that the fact that they are over 5000 years old and you're reminded how fleeting our lives are, how unimportant most of the things we fret about, how the Sphinx looks out over the sands just as it did thousands of years ago, and time marches on.

2. The Canadian Rockies at Banff
Stayed at the Banff Springs Hotel many moons ago. The dining room had huge windows and in the morning the sky and mountains were a gorgeous glowing pink. Later in the day, at the top of the ski lift, we took time to look around us. Deer in the valleys, majestic snow-covered peaks, what paradise should look like. Probably the most physically beautiful place in the world.

3. The Harbor at Rio de Janeiro
Rio has a beautiful natural harbor, extremely exotic and extremely breathtaking. The surrounding roads leading into the mountains and hills are rich with tropical vegetation and there is just something in the air. There's no place in the world like Rio.
My other favorite harbors: Hong Kong, Sydney, Valletta (Malta), Sevastopol (Ukraine) and our own New York.

4. The Ruins at Palmyra
In the Syrian desert lies one of the best-kept travel secrets, ever - Palmyra. Once ruled by Queen Zenobia, conquered by the Romans, the ruins are spectacular, especially when you see Bedouin on camels riding across them at sunset. Simply magical.

5. Venice
The entire city is a living museum. If you go, spend the night - pop for a good hotel on one of the canals. No car traffic, just people sounds at night - the way it was hundreds of years ago. Time stops. Venice is fragile, serene, elegant, a city like no other.

6. Tikal, Guatemala
Here are pyramids in the middle of the jungle. Turn the corner into a clearing and more pyramids. Stop to rest against a rock and it's really a ruin, complete with glyphs, moss, lizards. The silence of the ruins is broken by the sounds of the jungle. A place full of mystery and surprises.

7. The Acropolis
I thought I'd seen it all, but I was still moved, almost to tears, as I stood at the ruins of the Acropolis and looked out over Athens below. Here I was, standing where Plato, Socrates, and all the famous Greeks I learned about stood, looking out at the same city. Here is the cradle of European civilization, birthplace of democracy. Wow.

If I've omitted places which are obvious, like the Great Wall of China or the Taj Mahal, it's either because I haven't been there (yet) or they just didn't have that "Wow" factor for me that the above places did. It's a combination of the place itself and where you are at that time of your life. For example, Paris meant so much more to me in 2005 than in 1967, for various reasons.

I'd like to hear about some of your favorite places, whether it's a world-famous site or just a place that's off the beaten path, but worth a visit.

Previous Post Next Post
Comments
Bavarian Alps in Southern Germany- if Cinderella and Prince Charming lived it would be there. Everything is like a fairytale.
Cornwall, England- amazing views perfect for hiking the countryside, surrounded by water on three sides and very tropical for England.
Paris, France. Florence, Italy. Great adventures!
#1 Heather on 2009-08-02 21:58 (Reply)
Kyoto, Japan. Practically that whole city is an international treasure.
#2 Sandra on 2009-08-03 13:53 (Reply)
London means so much to me. It was the first 'real' travel experience I had. While it may not hold the beauty of some other places, it opened my eyes to so many possibilities. For that reason, holds a special place for me.
#3 Jen on 2009-08-03 15:50 (Reply)
This is exactly what i mean - it's where you are at that place in your life that makes a certain place special. London also has a lot of memories for me - each time i go there's something new to discover. Like Paris, it's ever-changing and ever-magical.

#4 Fifi LaMode on 2009-08-03 19:45 (Reply)
Thanks for the great wish list. And I'll add my vote for the Bavarian Alps as well, they are incredible!!
#5 Val Fisher on 2009-08-04 10:02 (Reply)
My husband suggested I add one of our favorite spots in Bavaria, Berchtesgaden. The view is incredible. We also love Bavaria - it's beautiful, the people are very nice, the food is good, the beer is great, and it's really like something out of a fairy tale.
Hey, there's an idea for an article!