Piracy may actually promote creativity and fuel the fashion industry, according to a recent paper by law professors Kal Raustiala and Christopher Sprigman. In fact, they say weak intellectual-property rules for fashion haven't harmed the industry—they've helped it thrive—and they call this effect "The Piracy Paradox.” 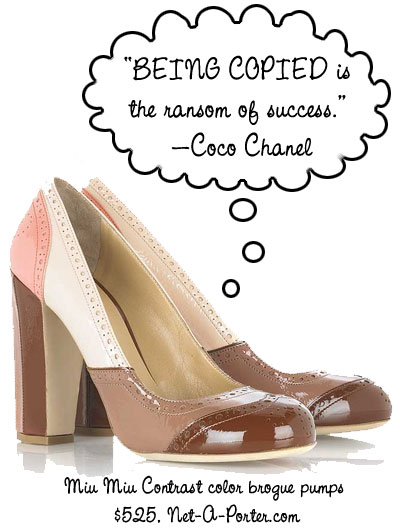 The New Yorker's James Surowiecki wrote a fascinating piece on the Piracy Paradox, and here's how he breaks it down:

From The Piracy Paradox by James Surowiecki: 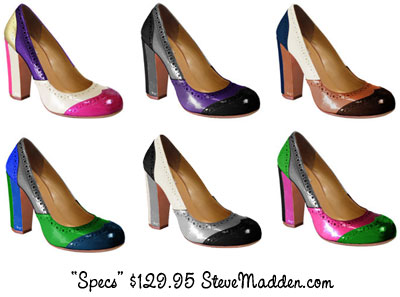 For us, the Piracy Parafox confirms our previously held belief that knock-offs do not undermine high-end designers. That's why we love bringing you designer looks for less, and will continue to do so. Granted, we prefer designs "inspired" by the runways rather than blatant copies cuz we're trying to express our own, somewhat unique style with the clothes and accessories that we wear, not someone else's. On occasion, however, we've unknowingly purchased an item that we just thought was cute only to discover later on that it was an exact copy of a designer's style. This can be a big turn-off (and in fact, we haven't worn said articles of clothing since). 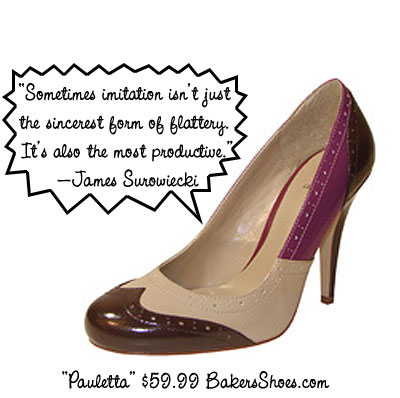 We will also personally never purchase counterfeits, which differ from designer-inspired fashions in that counterfeits pretend to be original products. This, again, dupes the customer (sure, most people know they're buying a fake when they buy it, but many do not) not to mention it's illegal...and who knows where all the profits are going? Besides, counterfeits are just plain tacky. Who wants to carry the same fake Louis Vuitton as 10 million other gals around the globe? By now they may have moved into the realm of kitschy-cool, but there are so many better options out there.

Anyways, we're sure that this complex debate will rage on for years to come. Even as we type, the Council of Fashion Designers of America is pushing a bill before Congress that would give original designs a legal protection similar to copyright. But the bottom line here at the Budget Babe is this: More often than not, the knock-offs are still too pricey. Take, for example, the $129.95 Steve Madden "Specs" featured above, an unapologetic copy of Miu Miu's dashing spectator pumps. Sorry, but that's still too much for a trendy shoe that's likely to be passé next fall. Oh, and the color combos are hideous. Pass.

The "Pauletta" pumps from Bakers, on the other hand, are actually pretty juicy. We honestly prefer the thinner heel, and the colors are spot on. Still, we'd wait for them to go on sale.

In conclusion, knock-offs are the nature of the beast. The next time you get your panties all in a bunch because Susie at the mall is wearing oh...DEER! copies of your $685 Christian Louboutin red-soled pumps, ask yourself if she isn't just doing you a big ol' favor.

Previous Post Next Post
Comments
the Miu Miu ones remind me of neopolitan ice cream. YUMMM
#1 taylor on 2007-11-01 08:44 (Reply)
You're right! Now you've got me dreaming about ice cream....
#1.1 The Budget Babe on 2007-11-02 09:40 (Reply)
LOVE this article Budget Babe- its so true, and it really puts fashion into a REAL perspective, instead of the elitist box so many ignorant people want to smash it into- Its funny how so many people in their striving to be special through consumerism really miss the big picture and their small role in it- although it makes us feel good and "special" to have an "it" item, we're really being marketed to just like everyone else in our economic bracket- Fashion is bussiness, bottom line, and like you said- these so called copy cat fakes are really a driving force in the progress of the industry- Really loved that you put it up- its important to keep these things in mind- perspective is key in life!

#2 Peaches (Homepage) on 2007-11-01 12:15 (Reply)
it's funny, but when i first saw the baker's shoes, b4 reading your comments, i said to myself how i like those best of all, with the thinner heel. sometimes the cheaper versions actually take the style in a better direction.

#3 maggie z on 2007-11-01 13:06 (Reply)
You raise an interesting point--sometimes designers copy the copyists. We read that Chanel once purloined the idea of adding raffia trim to a suit after an assistant showed her a Chanel knockoff that was being sold on the streets of Paris with precisely that detail

The trouble is that even if you have a a look that is similar the craftsmanship is not. IF you are trying to achieve status just don't. People can tell and it betrays your true self.
#6 Julie (Homepage) on 2007-11-05 19:36 (Reply)
Hi Julie, thanks for posting!

I guess our point wasn't to compare high-end original creations with low-end knock-offs, it was simply to say that designer-inspired fashions have a valid place in the market, and they play an important role in the life cycle of style, if you will.