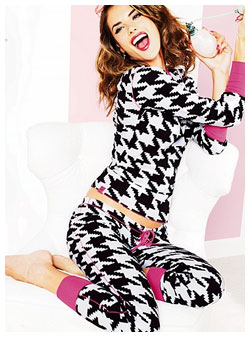 We were kinda surprised to learn that Victoria's Secret ranked second among retailers who recorded the highest online apparel and accessories purchases in July, according to a September 2007 article in Women's Wear Daily. The average amount spent per buyer: $177.74

Then again, we knew more than a few hardcore Victoria's Secret catalog shoppers back in college - the kind who would pour over each new issue then gleefully proceed to order half the store. We preferred to dissect the models in vain hope of finding some imperfection (we didn't find any) and pointing out obvious photoshoppage to anyone within earshot.

Still, we heart Vicky S, and so we'd have to say it's a "Yea" - but honestly their stuff isn't exactly cheap and it can be kinda hit or miss in terms of quality. Except, that is, when it comes to their panties (and their bras, according to my sister). LOVE the 5 for $25 deals. Also love how colorful, girly and naughty their brick-n-mortar stores always felt when we were mere teen mall rats.

Overall, we have a feeling that Victoria's real "Secret" is that they've mastered the art of selling the ultimate female fantasy. When you have flawless angels peddling your wares, does the product even matter? And in all fairness, what girl doesn't adore cute lingerie and loungewear? Heck, we know we do!

Oh, and the one time we ordered from the catalog, we ended up returning half the items because they were ill-fitting and didn't look anything like the photos. No, we weren't expecting to look like Heidi Klum, we just wanted an elegant, luxurious pair of silk jammies. Sadly, the set we purchased was anything but.

However, we are more than willing to give them another try - especially with the big pajama sale they have going on right now. So feel free to share any and all thoughts, and if anyone has had a great experience shopping the VS website, let us know!!

Featured above: We're loving these Thermal long jane pajamas in houndstooth on sale for $39.50, PLUS get a free pair of slippers with code PJSLIPPER ...great gift idea!

Previous Post Next Post
Comments
I only shop VS when they're offering free shipping (which they are now, through Saturday) because their shipping prices are ridiculous. I also feel like the clothes can be hit or miss. They did have some cute sequin tunics last month, and I scored a nice pair of suede boots.
#1 Campbell on 2007-11-29 15:36 (Reply)
umm... personally i think that the clothes really aren't worth their prices. More often then not my friend who orders from them repeatedly spends half her time sending things back to them. I like their undies, bras and pjs and thats about it. I think that the clothes sell because women want to believe that their clothes are going to make them feel sexy, when in fact I believe that you can find your own better quality items and still look just as good. I think too many think "oh, its from Victoria Secret? it MUST be hot" oye...
#2 Peaches (Homepage) on 2007-11-29 18:17 (Reply)
Quality-wise, their flannel PJs are well-made and comfortable, plus available in many color designs.
#3 Sue on 2007-11-29 18:17 (Reply)
This is good to know because I've been eyeing their flannels and could use some cozy new jammies for winter

#4 maggie z on 2007-11-30 16:14 (Reply)
interesting. no one has pointed out vs' marketing shift in recent years from young women to teenaged girls. i remember when the stores had a tasteful & tradtional feel, like a victorian boudoir. now the decor entails black laquer & hot pink neon everywhere. not to mention the cheap, logo everywhere including across your butt, "pink" clothing line. trashy, not sexy. actually i've always had a problem with their clothing. does anyone remember in the not too distant past, the "mom" jeans & unitards on models that looked like they were stuck in a Poison video??? i do have one positive comment. at the end of the day, i too still love the panties.