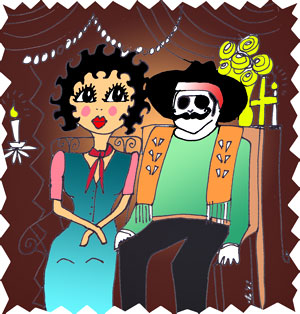 by Fifi LaMode
Guatemala is a Catholic country for the most part. But due to its rich pre-Christian traditions, many of the old customs have been incorporated into Catholic rites. Sometimes the lines get blurred, as in the case of Maximon, a mixture of Judas Iscariot and St. Simon, who always seems to be smoking a cigar. His popularity stems from his human weaknesses (and in colonial times, because the church didn't like Judas, the Mayans adopted him as a form of protest for being forced to renounce their old beliefs) - he's the patron of prostitutes, mob bosses and other characters living on the fringes of society. An offering to Maximon, or Hermano Simon, consists of a bouquet of 7 herbs, all meaning something.

In a small village near Antigua we were taken to his chapel. Along the street were shops selling candles not unlike the Cuban "Santeria" and herb bouquets. In the courtyard was an old woman smoking a huge cigar and a shaman performing a ritual on someone - he was smoking a cigar, chanting, and dancing. Inside the chapel was the statue, with a modern suit, tie, hat and cigar. Loads of heady incense and people lined up to make offerings. A little creepy...

I was happy to leave and arrive in the old colonial city of Antigua. There we saw the lovely baroque facade of the church of Nuestra Senora de la Merced (Our Lady of Mercy) whose priests would buy slaves in order to free them. The first Guatemalan saint, San Pedro Betancourt, is buried in the Church of San Francisco and throngs of people fill the church to pray at his tomb. Pope John Paul II came to Guatemala 3 times and canonized San Pedro. The people remember him fondly.

Easter is the most important day in the Catholic calendar and Lent is full of preparations for this event, a time for penitence and remembrance of Christ's Passion. In Antigua traditions are very strong and hours are spent making carpets of dyed sawdust in intricate designs. On Sundays in Lent Antigua is filled with purple-robed penitents who carry the figure of Christ through the narrow streets, destroying the colored "carpets" as they move forward.

This is what it all means: The suffering, the death on the cross, the Resurrection from the dead - the entire basis of Christian faith - is that Christ died because He believed mankind was worth saving. This is an affirmation of our worth in God's eyes, despite our weaknesses, the journey back into the light, redemption, rebirth, Easter. What a wonderful time of the year to be here.