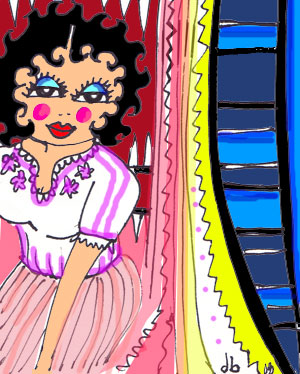 by Fifi LaMode
Several villages dot the landscape around Lake Atitlan. Probably the most visited is Santiago Atitlan. The shops on the narrow streets sell paintings, handicrafts and richly embroidered fabrics. Each region of Guatemala has its distinctive embroideries. In Santiago Atitlan it's birds: Quetzales, macaws, you name it.

What is also unique to the area is the headdress the women wear. It's a thin red woolen band that wraps around and around the head, forming a sort of halo effect. Of course the women make it look easy but it's a thin strip of wool and I don't know how they wind it around without anything slipping. The tradition is very old as these headdresses can be found on monuments from at least 1200 years ago. This area is also known for ikat, a tie-dyed thread used in weaving.

In the square there is a church that's a reminder that it was not always so peaceful in Santiago Atitlan. Guatemala suffered immensely during a 30-year civil war which ended in 1996. Many civilians died or disappeared. Some of the deaths were caused by guerrillas, some by government militias. Sometimes one masqueraded as the other to shift blame.

A particularly moving story is that of Father Stanley Rother, a Catholic priest from Oklahoma, who refused to leave his parish, even though he received numerous death threats. He returned briefly to the US, but told his family that the people in his parish needed him so he had to go back to Guatemala. In July 1981 troops burst into his house at 1 a.m. and murdered him. There's a memorial to him in the church, along with a memorial to the 14 civilians killed when government troops opened fire on them in 1990. The upshot is that this event caused such outrage after years of fear and silence that the army was forced to evacuate the town two weeks later and Santiago Atitlan became the first town with a population of over 10,000 without an army garrison.

Walking down the quiet streets and seeing the townspeople go about their daily business, it's hard to imagine all the strife Guatemalans endured during those years.

After several days of absorbing ancient and colonial history and being overwhelmed by the natural beauty, graciousness of the people, and fascinating handicrafts, today is a day of reflection. I reflect on the life of Father Rother, and how he chose to go back to a certain death and I wonder what drives someone to make such a courageous decision. Was it an obvious choice for him or was it something he thought long and hard about? He was a better person than I am, for sure. I feel there's a bit of that idealism in each of us, but the strength to follow through on one's beliefs is what differentiates the saints from the rest of us mortals. He qualifies as a saint in my book.