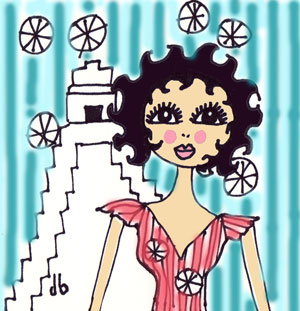 by Fifi LaMode
The Mayan city of Tikal dates back to 800 BC and at one time was home to over 100,000 people. The entire complex is a national park and Guatemala's pride. Howler monkeys make eerie noises which make you think you're in Jurassic Park. We were lucky enough to see not one but three toucans in the same tree. Other colorful birds, among them the trogon from the quetzal family, abound. If you are fortunate enough, you just may see the peanut bug which is a huge green thing in the shape of a peanut. They are very rare and I'm told they bite. We saw two mating - eeeeuw.

Tikal is spectacular - a much bigger area than I expected and surprisingly easy to get around. The walking paths are wide enough for 2 cars, though passenger vehicles are forbidden. The weather was unusually mild due to this year's La Nina effect (The same La Nina which caused such a horrible winter in the US also cooled off the jungle.) It's a quiet place, permeated only by jungle noises. The mounds of vegetation hide ruins which will not be dug up (only 15% of the city is uncovered), so we can only imagine Tikal's grandeur in days past. A careful balance is kept with nature in this very unique ecosystem.


The Temple of the Grand Jaguar is as impressive in reality as in the pictures. Indeed, the entire Grand Plaza is truly awesome. You can climb to the top of some of the pyramids, making for wonderful views and photo ops. They've made it easy by building wooden staircases on the sides so you don't have to slip on the ancient rocks (There's one temple I climbed, I believe it's Temple 4, where the view from the top was the same view used in one of the early Star Wars movies. How's that for trivia?). You sit on top of the pyramid and just look out over the tops of the pyramids and the jungle and feel good you made the effort to come here. Tikal is on a par with the Egyptian pyramids in grandeur.

Most people just spend one day doing a "highlights" tour. I chose to stay 2 days. The second day my guide and I set off for the less visited areas, like Mundo Perdido (Lost World) and there were very few people around. The guides know which animal makes which sounds and mine led me to see many wonderful creatures. In addition to the howler monkeys, we saw other monkeys, birds, lizards and, thankfully, nothing threatening, except maybe for that peanut bug. Tikal really is a paradise for nature lovers. Imagine walking down a path, turning a corner, and "finding" a ruin in a clearing. If you go, opt for more than one day. I thought I'd seen it all on day 1, but day 2 was the best. I'd gotten used to the jungle and was no longer apprehensive about it, so I could truly enjoy the mix of historical ruins and nature. It's an experience you won't forget.

At the entrance there are two small museums housing some of the artifacts. See this after viewing the ruins in order to really appreciate them. There are scenes from the Popol Vuh, the Mayan bible. As with any trip, a little research and reading goes a long way. Get the Popol Vuh from the library (I got my copy at Barnes & Noble) and at least skim over it to get an idea of what the Maya believed in. This is truly a fascinating culture and Tikal is its showcase.

Previous Post Next Post
Comments
The Popol Vuh original is in the Newberry Library in The City of the Wild Onion, Chicago. Not many people know that.

#1 pirate jenny on 2008-05-15 10:31 (Reply)
Hi Fifi! Just so you know, the correct way to describe the city of Tikal, the Popol Vuh, and every other aspect of the Maya people and culture is *Maya*, not *MayaN*. The term Mayan is only correctly used to describe their language. I had to take an entire class on the Maya in college and my professor ingrained this in my brain for all time. Often, even scholars who write books about the Maya and tour guides at Maya ruins are unaware of this technicality. Just thought I'd let you know; informed women are sexy women!
#2 Katie on 2008-05-15 12:04 (Reply)
Thanks for catching that. I wasn't sure. I always thought Mayan was the adjective and Maya was the people. Now it's clear.
You took an entire class? How interesting. I'm reading the Popol Vuh now and the stories are fascinating.