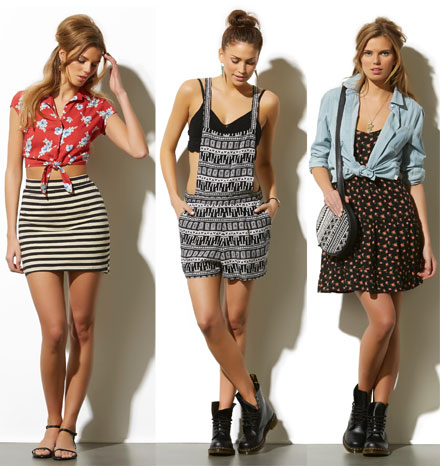 Adam Levine has expanded his successful men's fashion collection at Kmart to include women's clothing and accessories. Levine is a judge on The Voice and the frontman for the band Maroon 5, as well as People mag's Sexiest Man Alive title-holder. So what does he know about fashion? Not much, by the look of these clothes. But according to The Recessionista, his family is in the retail business, so maybe Levine is on to something. His Kmart line is priced from just $6.99 for accessories to $29.99 for apparel. Just in time for festival season, the spring line is replete with crop tops, mini skirts, rompers, sundresses, and short-shorts. It's a bit young for me personally but I will say this - it's better than a lot of what's in stores at Kmart right now, which isn't saying much, but it might be worth a look. Am I being too harsh? I actually really like Adam Levine as far as celebs go but these clothes just look so generic. Still, I think it will probably do okay with Kmart shoppers. What do you think?

Previous Post Next Post
Comments
some of the pieces are cute, but they look like items that already exists in kmart's other lines, like route 66 or the dream out loud line. i'm sure he'll do good, though shrugs
#1 Niki @ Cheapalicious (Homepage) on 2014-04-11 06:52 (Reply)
atrocious line for girls. but Niki is right, its not any different from what they already have in KMART.
#2 Jayvee on 2014-04-11 08:26 (Reply)
I think it is very possible to find cute clothes at K-Mart...I have seen some BONGO purses, Sofia bathing suits, Jaclyn shoes, and Attention brand clothes that are comparable in style to things I saw at Target, Old Navy, TJ Maxx, and other places that don't have the stigma K-Mart has. While more than half of it may be "eh", there are some hidden gems in there too.
#3 Chrissy on 2014-04-11 10:03 (Reply)
We would all love to buy expensive designer gear but it is great to see that you can still be stylish in lower priced clothes and shoes. I think it also encourages people to experiment with their outfits and try new looks as the risk is reduced when you are buying inexpensive things. The last time we were over in California, we used to joke that we had bought some clothes from an upmarket designer department store called Tarrjay, when we had actually been to Target.
#4 Laura on 2014-04-12 09:00 (Reply)
Leave a comment