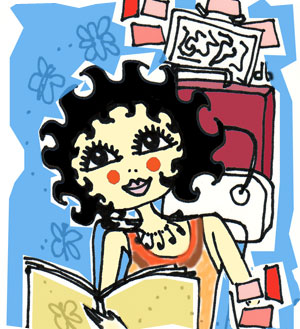 The Budget Babe's International Travel Advisor Fifi LaMode tells you everything you need to know about planning a fabulous trip to Guatemala. —TBB

by Fifi LaMode
Hopefully, after reading my last series of articles, you are packing your bags and waiting for Fifi's tips for your upcoming trip to Guatemala. So here goes:

Visa: None. They want us to visit, so they make it simple. You fill out a card on the plane. That's it.

Air: Too easy. It's 3 hours from Houston, 5 from NYC on nonstops. Connections are painless. I flew Continental through Houston but other airlines go as well. The airport in Guatemala City is modern, clean and efficient.

Getting around: The currency is the quetzal (named after their national bird which is gorgeous but you'll never see because it hides in the middle of the jungle), but US dollars are also used in shops and hotels. ATM's are everywhere and you can get money in dollars or quetzales. How easy is that?

Tours: I used General Tours (www.generaltours.com) because the groups are small (mine had only one other person!) and in Tikal it was just me and the guide, which was great), the hotels are top-class, and the guides are excellent. You have ample free time and are not limited to huge hotels and restaurants that cater to large bus tours.

If, however, you like big tour groups, Caravan Tours runs regular trips to Guatemala which also include Copan, a Mayan complex in Honduras, which I hear is different from Tikal and really worth seeing. Caravan is very reasonable and has a good reputation, but their tours fill up quickly. I would not recommend going alone, i.e. without a tour of some sort, because of safety issues. There are armed robberies and especially on the smaller roads it's inadvisable to travel on your own. We were just two women and a local guide and we felt safe at all times because Tony would always talk with the locals in the small towns to check if there was any suspicious activity in the area. This made our trip stress-free.

What to pack: Guatemala is called "Land of Eternal Spring" because the weather is mild year-round. November to April are the best months for visiting, with a sunny, dry climate, mostly in the 70's. Evenings are cool, especially in the highlands. May to October is the rainy season. Rain means RAIN. Go in the dry months.

Dress modestly - they're conservative in their clothing styles. Even in the jungle it's not advisable to wear shorts because of the insects. Speaking of which, pack a small bottle of heavy-duty DEET ($3-4 at Target). Although we didn't have many bugs when I was in Tikal due to the freaky cool weather, they get sand fleas, mosquitos and other things that like to nip at human flesh. It's the jungle after all. In the lake areas there are mozzies.

Bring one of those fold-up plastic ponchos (97 cents at Target) - they weigh nothing and will keep your day from being ruined in case of a sudden rainfall. They say to bring your own soap and shampoo but you don't have to - all the hotels had them, it's just that the quality is not always what we're used to. Deal with it, it's just a few days, and the lighter your luggage, the freer you are (one of Fifi's travel mottoes).

Pack good walking shoes - jungle paths, cobblestone streets, dirt roads are no fun with strappy sandals - take a pair that's tried and true. You'll feel fitter each day you're there with the fresh air and healthy food. Of course you need a camera, and sunblock. A few words of Spanish will help and a smile goes a long way. Other than that, Buen Viaje!

P.S. If you have any questions regarding the logistics of traveling to Guatemala that have not been addressed, feel free to ask Fifi.