Dior's "Mise En Dior" Tribal Double-Pearl Earrings retail for approximately $400. I'm a bit late to the knock-off game on these because apparently they've been so popular that Dior raised the initial price of $290 to $400 since everyone's been scooping them up. I'd been admiring them on Jennifer Lawrence in the fall 2014 Dior ad campaigns.

And on Rihanna who wore them with an all-pink Dior ensemble - girly with an edge.

The moment I spied these Pearl 360 earrings on BAUBLEBAR.COM, I scooped them up! I will post a pic to Instagram soon. Available in a variety of colors for $28: 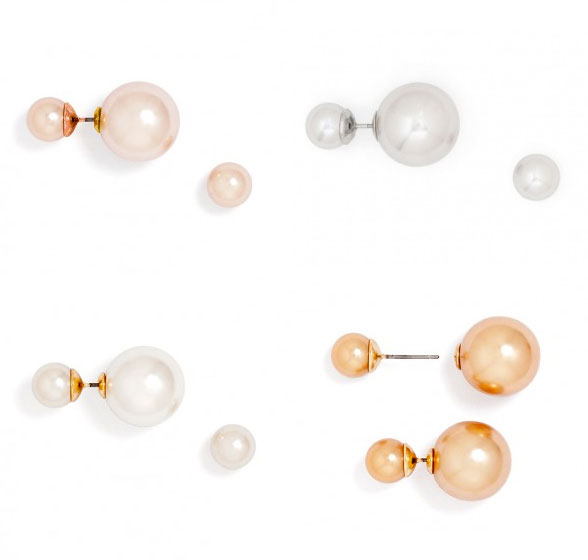 Shame on me, because I later stumbled upon these Apt. 9 pear-back earrings for just $7.90 at KOHLS.COM. Hopefully the Baublebar pair will be better quality although I can't say they feel super solid. I wore them for half a day so far and no skin irritation, so that's a plus!

Posted in: Budget Fashion, Dior, The Look for Less

www.bluelabelsboutique.com
#1 Kristie (Homepage) on 2014-10-12 11:41 (Reply)
I own four pairs of the Baublebar ones and love them! The one note of warning: the "pearl" ones are very lightweight, but the "bubblegum" studs (e.g. the black back and gold or silver front) are incredibly heavy! The black part is really weighty and I wasn't comfortable wearing them. I'd bet the marble and watercolor ones are similarly heavy.
#2 KT on 2014-10-12 13:51 (Reply)
Very interesting, thanks for sharing this. I got the pearl ones which are very lightweight - on the one hand, they don't feel very sturdy, but on the other hand, they'd be terribly uncomfortable to wear if they were any heavier! I'm glad I got the pearl because I can't seem to wear heavy earrings these days