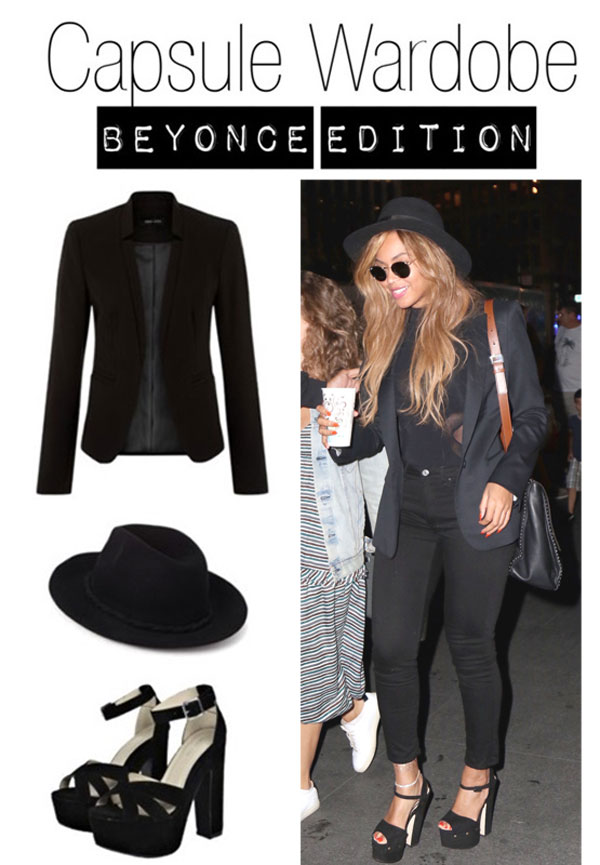 Welcome back to Fashion Capsule and say “hey” Ms. Carter! In this weekly segment, I will show you how to style three items under $50 for an entire week’s worth of outfits. We’ve got a very special group of outfits this week. After being inspired by a picture of her rocking some fab street style, this week is a Beyoncé takeover. Each outfit has been inspired by Beyoncé in some way, shape, or form...because really, who doesn't want to inject a little Queen Bey style into their everyday? Let’s get started and flawless!

Newlook Black Notch Front Blazer $44
Who doesn’t need a great black blazer? It should be a staple in every woman’s closet. It’s sleek and versatile.

Forever 21 Twisted Band Wool Fedora $16
I’ve used this hat before in the capsule. I really love it. It has a definite rockstar feel, and apparently Bey thinks so too.

Boohoo Julia Cross Strap Heels $35
Platform heels are not always practical. When you’re Beyoncé, however, platforms are always in the equation. 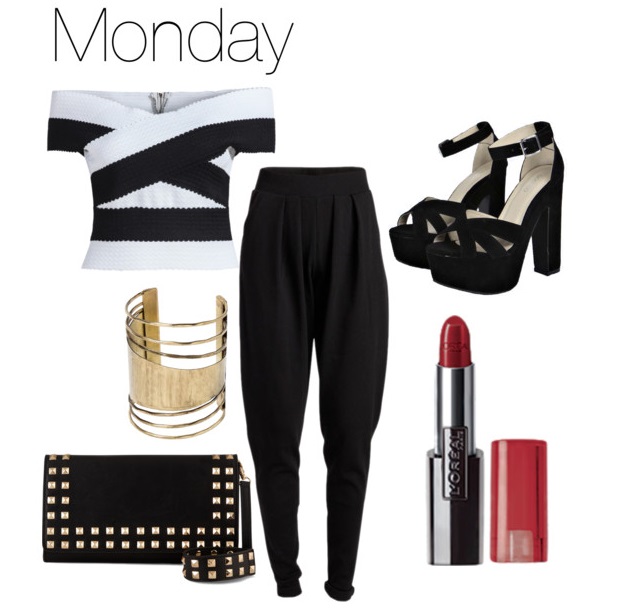 The Grammy’s were on February 8th this year, which happened to have been a Monday. So, what better day to wear a full-on glam Grammy’s outfit than on Monday? This outfit was inspired from Bey’s 2013 Grammy’s outfit. The harem pants with the black and white shirt replicate the look of a jumpsuit. With the inclusion of a sleek ponytail hairstyle and this bright red lipstick, you’d be all set to rock that red carpet. 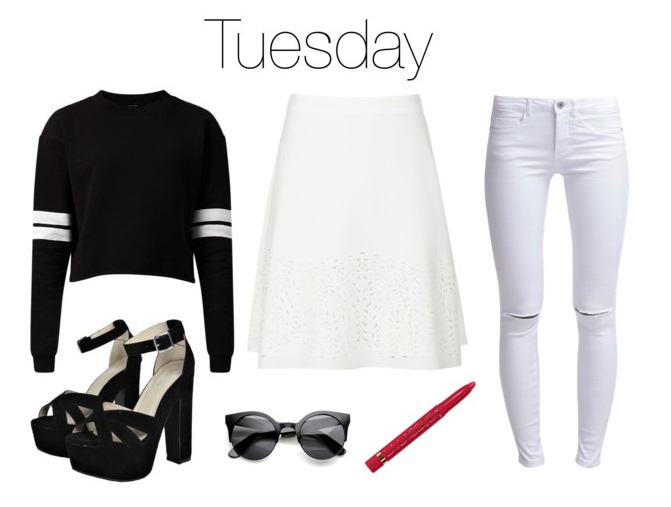 As I was searching through the fabulous pictures of Beyoncé’s style history, I found one that was really interesting. It was a really stylish shot of Bey with her hair in a tight, low bun wearing cat-eye sunglasses with a bright, red lipstick. What was really cool, and totally Bey, was she was wearing a white skirt over her white pants. The look, despite being really fashionable, had a sporty vibe as well. I used to wear skirts over my pants in middle school. Maybe I inspired Beyoncé? 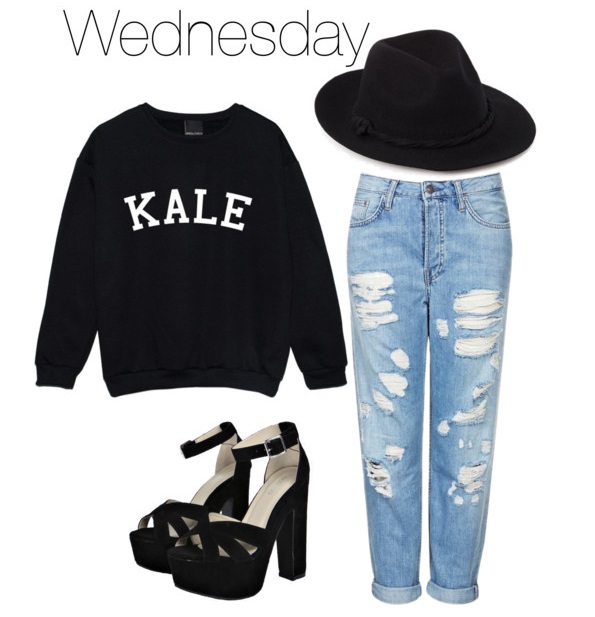 I want this sweatshirt. I wanted this sweatshirt the first time I saw Bey wear it (here). It’s cute, it’s quirky. Pair it with some boyfriend jeans and you’re on your way to being Beyoncé. 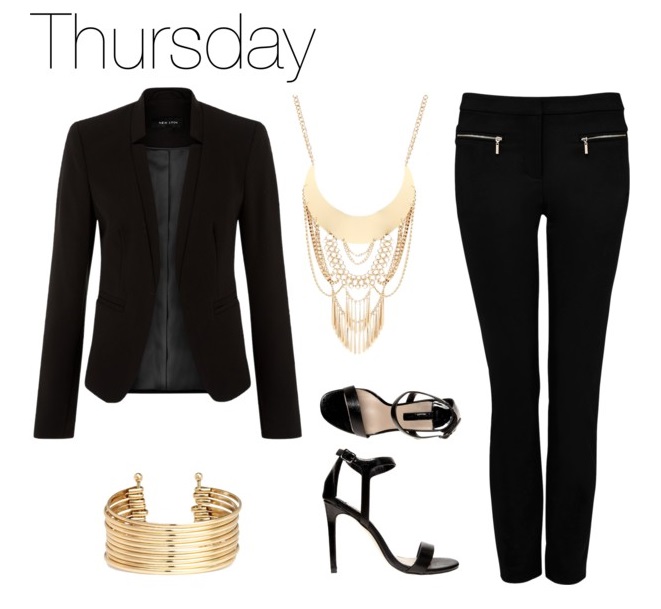 When you’re Beyoncé, you have to attend many events. One of those events may be the launching of your fashion line, House of Deréon, created with your mother. This outfit is based off of an outfit that Beyoncé wore to said fashion show with her mother. If you’re wondering where the shirt is, keep wondering. This blazer, along with some strategically placed fashion tape, is your shirt. The sleekness of the black pantsuit, with the added flair of the gold jewelry, and the sexiness of the blazer are sure to make you the most flawless you. 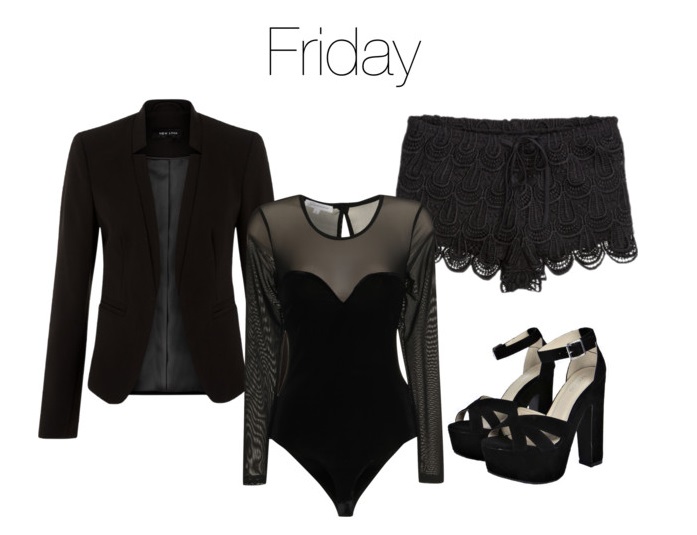 What?! You’ve never worn a bodysuit before? Preposterous! When you’re Beyoncé, you wear that bodysuit and you rock that bodysuit. As a ballerina for 18 years, I can say that wearing leotards/bodysuits is actually a pretty amazing thing. They suck everything in and can actually be quite flattering. They’re like Spanx worn on the outside. I added the blazer to this outfit just in case you are a little uncomfortable wearing the bodysuit out in public. It adds a little more wearability to a Superbowl-worthy outfit.

This Saturday outfit is based off of the main image that sparked the Beyoncé takeover. It’s a great outfit to rock the streets like your own personal runway. 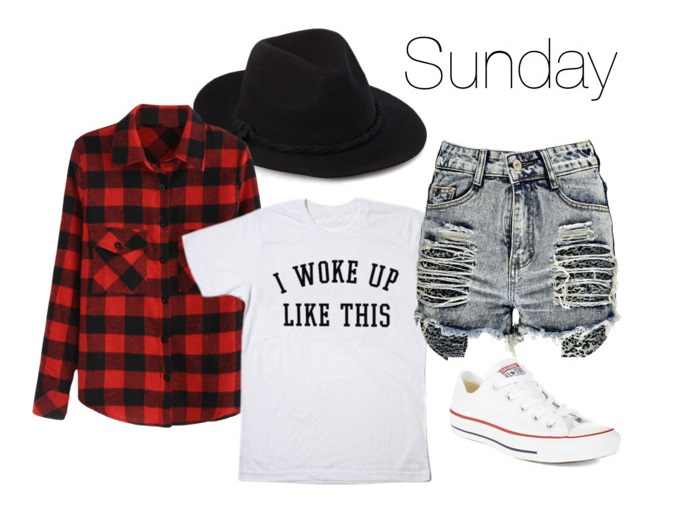 Did you wake up like this? Something I noticed while flipping through pictures of Beyoncé’s style is that she is beyond capable of rocking both the glamorous look and the grunge casual look. She has no reservations about her style. She just owns it. She dresses how she wants to. So, yes, she did wake up flawless and so did you.