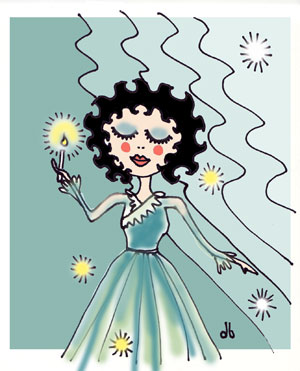 by Fifi LaMode
I've wanted to visit Lourdes since I was a child, so I went on a tour of the shrines of France. After seeing a bunch of churches in Paris, we set off for Lisieux in Normandy to see the home and shrine of St. Therese. Ah, the French countryside. Lisieux is low-key, friendly, much cheaper than Paris (note: Once you leave Paris, everything is about 20% cheaper.) A plate of cheese, fresh bread and a glass of Cotes du Rhone and I'm rejuvenated. All for under $12 US. Love this place. Bought a St. Therese cake, and the proceeds go to the St. Therese school for pastry chefs - now that's a worthy cause if ever there was one, encouraging French pastry chefs. Yes.

Now about Lourdes. At first glance I thought I was in Las Vegas for holy people. The shops have all sorts of junk, from Virgin Mary night lights to schlocky bracelets with saints, popes, kitty cats, you name it. Then I attended a French Mass in the Basilica and the candlelight procession. What a moving experience to see folks from all over the world praying together and being nice to each other. It grows on you. What's there to see? Well, for starters, the Grotto where the Virgin appeared to Bernadette. Get as much holy water as you want - it's free. Bring your own containers or buy anything from vials to gallon jugs or used Evian bottles. I filled mine up and used it as drinking water. Better than Evian.

In the town there are various sites related to St. Bernadette's life. At the Grotto there are 3 churches, built on top of each other. The most impressive is the most recent, with mosaics inside and out, and a huge mosaic Blessed Virgin that looks like, well, Cate Blanchett. She really does. The whole scene is very kitschy but beautiful, with odd little cherubs surrounding her. There's also an underground basilica where they wheel in sick people for the healing ceremony. The procession of sick people, including many children, will bring tears to your eyes.

Be careful of the restaurants in town - luck of the draw. What sounded like a good deal, 9.50 Eu for a mixed salad, roast chicken and fries and fresh fruit, turned out to be not so hot. The chicken was not a succulent fat one like you see in the countryside, but his poor younger brother who barely learned to walk. Gosh it was a little chicken. A chicken for Hobbitts.

In the evening, not expecting much and not wanting to walk far (a. I was walked out and my feet were ready to fall off - being a pilgrim is hard work; and b. it was raining), I stopped in the Cafe Eden which, truth be told, had all the warning signs: pictures of the food, English menus. But the owner was very welcoming so I stopped in. My last chance to escape came when I got up to leave and said to the waiter that I couldn't stand the loud music. He immediately told the owner to turn it off. All of a sudden this place ain't so bad. A bowl of spaghetti and a 1/2 bottle of the local vino will run you 15 Eu, which is not bad at all in La Belle France these days. Plus they let you sit as long as you want nursing the wine (Contrary to popular belief, it takes Fifi a LONG time to get through 1/2 a bottle - usually 2 days!). No smoking inside restaurants any more, so sitting inside isn't bad at all as the rain's pouring down. They take Visa and Master Card and there's picture of some saint beneath the sign. Since you don't go to Lourdes for gourmet food, I'd recommend this place for decent home made grub at reasonable prices.

As for the place itself, not everybody gets cured in Lourdes, but they say everybody leaves a little bit changed. I did.