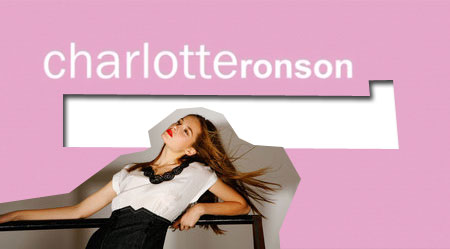 From the Gilt Groupe blog:
"London-born and New York raised, designer Charlotte Ronson earned instant recognition and the attention of publications like Teen Vogue, WWD and the New York Times after launching her self-named collection in 2000..."

"Known for her feminine trendsetting designs, Ronson’s cozy crocheted tops and embroidered weekend tunics quickly became favorites among fashion forward celebrities, hipsters and socialites including Gisele Bundchen, Kate Moss, Lindsay Lohan and Nicole Ritchie. In May 2002, Ronson opened her flagship boutique on Elizabeth Street in New York City’s NoLita, garnering international press coverage. Since its beginnings, Charlotte Ronson has developed a signature aesthetic that is known for its feminine sensibility and originality. Today, the line is distributed in high-end department stores and boutiques throughout the world and is now a distinguished and exiting Gilt Groupe feature."