Upon seeing the new M by Mariah perfume ad, we marveled at it's mediocrity. Not because we have anything against Mariah Carey (we are in awe of her incredible voice and have been huge fans of her music since the early '90s) but because the photoshoppage is cheesy and has a low-budget feel.

However, we read an interesting tidbit about the thought process behind the ad and it kinda helped us see it in a new light: According to Eyeshadow Government, the ad - which pictures the songstress cradled along a lake's surface below a glowing sunset, her hair damp and curving - is an allusion to French post-Impressionist painter Henri Rousseau's 1897 masterpiece, The Sleeping Gypsy. 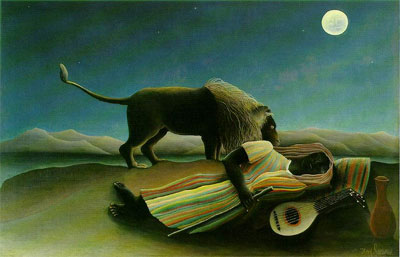 Now we know what you're thinking - at first glance, it's hard to see any resemblance between the two images. But knowing a bit more about Rousseau and the meaning behind The Sleeping Gypsy brings the similarities into focus: The subject of his painting is a musician, a traveler, a wanderer, a dreamer. At the same time, she is an outcast with no clear social standing. She slumbers beneath the stars, vulnerable and exposed.

Sure, Mariah's professional career has been wildly successful, but you can guess where we're going with this - Considering Mariah's personal struggle for acceptance and search for self (The Emancipation of Mimi comes to mind), one can easily see how she might relate to the poetic message of this particular piece of art.

Rousseau himself was also somewhat misunderstood (what artist isn't, right?) and criticized throughout his career for a perceived lack of talent - and yet he had a huge influence on painters who followed him, including Picasso, and today his work hangs in some of the greatest art museums in the world.

Personally we've always enjoyed Rousseau's strange and wonderful paintings that allow imagination to trump reality, and creativity to surpass technique. And we'll continue to admire Miss Carey for her talent and willingness to so openly expose her emotions through her music. (But don't count on us to buy the perfume!)

Previous Post Next Post
Comments
wow! who knew right? I mean, I guess thats creative in the sense that she feels a connection with the gypsy, but lets be real here- NOBODY who watches that commercial is going to know its based on the painting, and I'd say the majority of people who see the ad won't even have ever seen the painting. With that being said, its still a bad ad. I've seen it, and I was like "whoa! lame" Its an all over odd situation, bad commercial, meaning that nobody will understand, celebrity perfume.... yikes....
#1 Peaches (Homepage) on 2007-11-27 10:53 (Reply)
lol, you're probably right. i just had to jump on the opportunity to mention Rousseau (i'm an art nut!)
#1.1 The Budget Babe on 2007-11-28 13:14 (Reply)
what's next? paris as the can-can dancer in a lautrec poster? (although that's not such a stretch - her step-grandmother or great-grandmother zsa zsa gabor played a cancan dancer in the movie about toulouse lautrec 'moulin rouge')
i agree that nobody who buys this rubbish will see the comparison. nice try to fit some culture into the mundane trash world of celebrity products, BB! we have to lift the bar somehow, right? gone are the days when people bought givency's interdit because somebody classy like audrey hepburn wore it, even though she never plugged it for money.