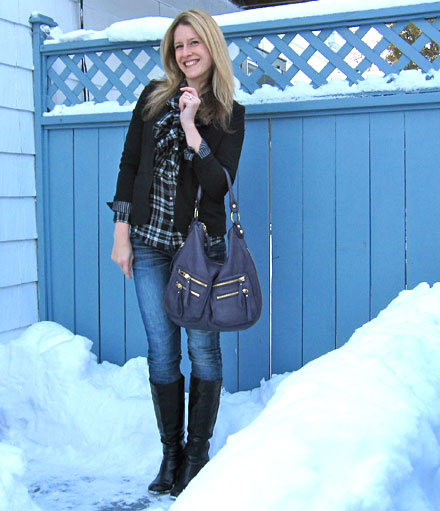 On Christmas Eve, my boyfriend proposed to me in the park across the street from the house where I grew up, under lightly falling snow. It was perfect. Camden and I met in 2004 when we were both working for Oprah.com in Chicago, and the rest, as they say, is history. He popped the question with a Tiffany solitaire, the same style of ring which my father gave my mother when they got engaged over 39 years ago. Between holiday travel and all the snow storms we've been having (not to mention I'm the world's biggest procrastintor) I haven't had a chance to tell you guys but I felt like sharing this happy news just in case I start tweeting incessantly about wedding gowns and color palettes and such.

Posted in: What I'm Wearing

Wow... I know it might be just a little sarcasm, but DAMN, to even come up with that is just a wee bit superficial!
#33.1 John on 2011-01-14 03:24 (Reply)
What a memorable and romantic proposal! Thanks for sharing the exciting news with your readers - like most people I love a wedding and a beautiful happy bride. Look forward to some posts on all the details organising the wedding. Congratulations!
#34 The_Dark_Lady_2 on 2011-01-14 04:05 (Reply)
Yay! So exciting!

Dude, no close-ups of the RING? What a rip-off

I too am recently engaged! (he proposed the day before Thanksgiving while we were on my favorite Caribbean island) And have also been together since 2004 =) So I am totally looking forward to any wedding-related posts!