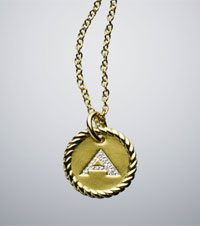 I have looked high and low for a necklace similar to the David Yurman Cable Collectible Initial Necklace ($595) that wasn't as expensive but can't find anything more than a small stamped disk necklace on etsy. I was hoping to find one for my sister's birthday at the end of this month. —Sarah

Initial pendants make great gifts because they're personal and can be worn alone or layered with other jewelry. Here are some affordable options that I think your sister will love:


First up, on the low end, we have this initial pendant from Urban Outfitters that's $29. It's similar to the David Yurman in the sense that the letter is rendered in rhinestones. Not quite diamonds, but still very pretty and shiny.

Next, we have these initial pendants by Charlene K., just $35 in gold or silver ($50 with the chain). I actually own one and wear it daily. I've had it a few months now and I have to admit it's starting to lose its luster, but I think it still looks pretty and people ask me about it all the time.

If you're willing to spend a bit more, you can scoop up this beautiful disc pendant by designer Erica Anenberg for $63. The script lettering provide some contrast and interest.

Step up to $88 and you can get this vermeil initial pendant by Jessica Elliot.

Helen Ficalora is a popular jewelry designer whose delicate charms have earned her a loyal following. Her initial pendants in yellow gold are $145 each; white gold and pink gold $155. Call 877-754-2676 to order. 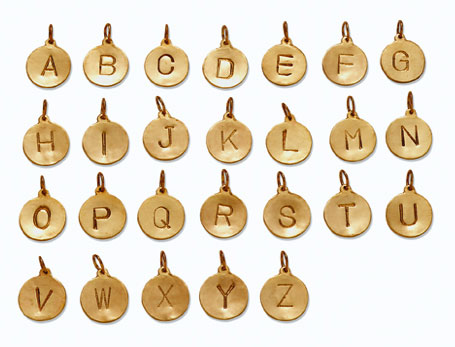 Finally, I found this insignia necklace by Waxing Poetic for $155 at Max & Chloe. It's silver, but it captures the antique feel of the David Yurman.

My other tip: Check out your neighborhood jewelry stores. Sometimes the smallest shops hold the biggest treasures.

Previous Post Next Post
Comments
I have the Charlene K one too. I never take it off! I got it for $25 bucks (chain included) on an ideeli sale. I've actually seen it pop up twice on ideeli after I got mine around Christmas, so keep your eyes peeled