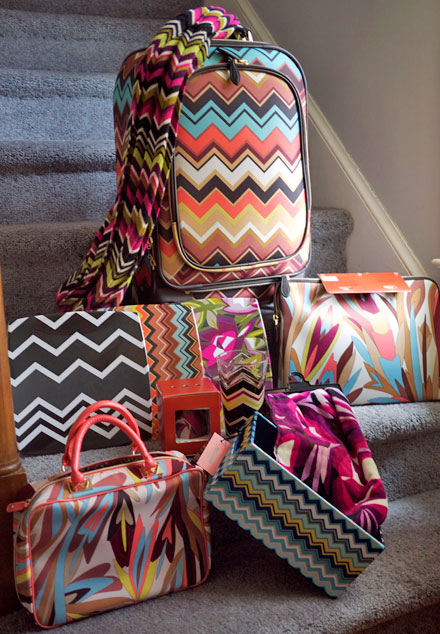 When the now infamous Missoni for Target collection launched, and shelves were laid bare within mere hours by eager fans and opportunists alike, I was quick to express my disappointment as one of the many customers who was too late to the party and missed out on all the goodies. Poor me, I know. Boo hoo. Well, I think it's only fair to follow up on my initial post with a complete list of the items I actually did manage to acquire in the weeks following the fast-fashion fiasco.
First of all, when I attended the Missoni for Target press preview a couple months ago in New York City, attendees were gifted two items: I received a free makeup case and infinity scarf. Both are amazing, and I was very grateful to get these items, even if I wouldn't have purchased them for myself. I've been wearing the scarf and it's cozy and actually warm because it has some wool in it. Nice.

Secondly, my dear sister, who lives in Chicago, went to three different Target stores in her area to look for stuff for me. I know, I'm lucky. She managed to track down one candle, one tumbler, three plates, one hand towel and one decorative box for me. I was ecstatic. My mom thought we were crazy. But when something is denied, you want it even more...

Thirdly, while driving from Connecticut to Chicago for my wedding, my then fiance and I stopped for the night in Perrysburg, Ohio. There, we visited a Target store to get a can opener and what did my eyes behold?! Missoni for Target suitcase! I took it as a sign, and bought the colorful striped carry-on trolley for a staggering $179.99. Wedding gift to myself, I rationalized. And I can carry it on my upcoming honeymoon. I also snagged the laptop sleeve. If you have any concerns about the lead warnings on some of the Missoni items, you can read more about it here. Kinda weirds me out...

Lastly, during a recent trip to my local Target, I noticed about a dozen or so items back in stock, probably items that had been returned, but nothing caught my eye. I am Missoni-ed out. But, it was nice to see a few things were available for others. Like a floral comforter, picture frames and makeup cases. 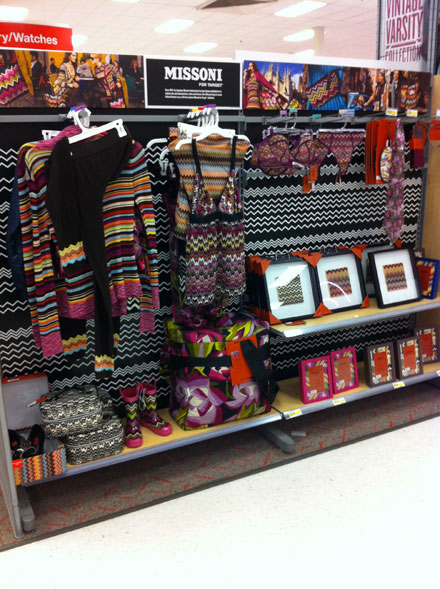 Ultimately, I didn't get what I had planned on purchasing (shower curtain, rugs, mugs, etc.) but I'm satisfied with my Missoni loot. Everything blends in well with my existing decor. All in all, not a bad haul. I still think the way Target handled the launch was a mess, but at the end of the day, it's just stuff.

Did your Missoni for Target tale have a happy ending? Or are you boycotting the whole designer collab thing from now on?

Previous Post Next Post
Comments
Unfortunately for me I couldn't get a sweater that I was coveting for so long due to a) couldn't afford it due to financial hardships this summer and b) it sold out before I even got to see it. I decided to meet up with a friend at our Target and torture myself anyway. I ended up buying a $10 box.

I can't decide who to be more angry with: Target or eBay sellers who wiped out the stores and jacked up the price 3 fold. I deleted my eBay account some time ago (I was sick of being ripped off by buyers AND eBay..as a seller myself). This only solidified my animosity towards the site. Target, while I still love them, the Missoni disaster tainted my love. I was hoping to score a sweater a few weeks after the debut but alas, it was never meant to be.
#1 Roxanne on 2011-10-04 11:48 (Reply)
Lucky you!
Now that I don't live in the US anymore, target.com is the only way to go. I thought I could score some goodies due to the time difference but instead had to went through the same thing a gazillion people around the world did! All I wanted were those heels. Just one pair!

In the end, I resorted to eBay. I wanted them bad, and having already lost a couple bids, I decided to bid for 2 pairs at the same time and guess what, I won both this time round!

What am I going to do with 2 pairs of the same shoes in the same size? I guess it's going back on eBay...I feel guilty for saying this!
#2 Adeline (Homepage) on 2011-10-04 11:55 (Reply)
I have never been interested in the Missoni stuff, but my local Target was cleared out the day of the launch, also. However, just this weekend I noticed we had an almost complete restock of the home items. I don't know if it was a fluke or what (my local Target is going through a redesign to make room for a grocery section), but I was shocked!
#3 Ashley (Homepage) on 2011-10-04 12:37 (Reply)
"but at the end of the day, it's just stuff."
And that's why I love your blog

#4 Reva (Homepage) on 2011-10-04 12:55 (Reply)
I got my long dress with matching cardigan and the chiffon sleeve sweater about 10 days after the launch, all 3 items in medium, one was too big, one too small, and one just right! I have recieved several emails from Target saying my ballet flats and infinity scarf are being back ordered; the delivery date on those is now sometime in December! I am not hopeful of ever seeing those 2 items! Still love Target, though, will shop there forever! last time I was in I saw a Missoni neck pillow, B&W zigzag, had to stop myself from buying it!
#5 Patti on 2011-10-04 12:57 (Reply)
I wrote in on your earlier post saying that I arrived on Missoni Day at 8:10am and was told that the bath towels, comforters etc... were NEVER going to come in. Everything was so picked over. Target made a huge mistake. With so many people willing to fork over their hard earned money for Missoni, they will now spend it some place else - and in these times that's very significant because it's not as if Target gets another chance to collect that money - especially for those shopping for Christmas gifts, fall wardrobe etc... I think the biggest loser is Target. Really, some of the merchandise looked so cheap for the price ie some of the winter scarves, the balding, badly pieced throw etc... Other things that got good reviews, I never saw. I look at it as a positive, because I didn't spend money on things I may have regretted later.
#6 Judy on 2011-10-04 12:59 (Reply)
im actually boycotting. i went to target and they had the one dress i wanted all along and in my size (assuming it was a return). i took it as a sign, picked it up, and walked around the store with it "just in case". by the end of my trip, i realized that sign or no sign, i am so over the zig zag and put it back.
#7 Jennifer (thelooksforless.com) (Homepage) on 2011-10-04 13:32 (Reply)
I ended up returning the flowered blouse I got -- while it was cute and fit well, I decided there were other things I wanted for my fall wardrobe more. I still love the suede pumps and silk scarf I got though and the small picture frame, which is just enough zigzag for me.

The Brooklyn Target got a re-shipment of some of the bedding and still had quite a few of the suede pumps -- not sure if they were all returns or not. A few other homeware items have reappeared in quantities that suggest they are returns as well.
#8 Andrea on 2011-10-04 14:48 (Reply)
I've managed to snag a few items since the whole debacle began. I got the robe (which will be used as a jacket), the flats, the black sweater with flower, a makeup case, and an infinity scarf. All in all not too bad since my Target was wiped out. They must have gotten some stuff returned or something because they had quite a few scarves and some gloves that were not there previously.
#9 Tracie on 2011-10-04 15:05 (Reply)
Today, I just happened to be across the street from a Target I don't normally go to, and decided to make a quick stop in. I was pretty surprised to see a lot of Missoni items still in stock. There was nothing I was even close to debating spending money on, but it was still nice to be able to see more items in person. My favorite piece was the gold infinity scarf; probably would have bought that had it been cheaper. I don't care what it is, this little bargain shopper will not pay $25 for one scarf.
#10 Orphaned Apparel (Homepage) on 2011-10-04 19:31 (Reply)
I LOVED my Missoni for target shopping experience! I Giggled with my bff, made new shopping (swapping) friends, and made my daughter the most fashionable 3rd grader at school. We got there early and still didn't get what we wanted off the racks, but staking out the changing room and haunting the isles for friendly swappers paid off in spades! Check out my post at ROSEYstyle.blogspot.com and check out my cute girl when you like my ROSEYstyle facebook page.
#11 Jamie (Homepage) on 2011-10-04 20:03 (Reply)
I honestly wasn't a big fan of the Missoni for Target collection but after seeing how crazy things got when it was realized I am now terrified for their Jason Wu collaboration (which i see is next!) Now this i am really excited for and I hope and pray that Target learned their lesson and handles this upcoming project better. Because I may just cry if I don't get a piece of this one.
#12 Tara (Homepage) on 2011-10-04 21:02 (Reply)
I saw some missoni for target items at my Goodwill over the weekend. A black and white zigzag vase for $20, picture frames, a set of plastic bowls. I was surprised to see that Target has donated Missoni stuff already but nothing appealed to me. I did snag a thrifted fur vest for $7 though

.
#13 Joanna on 2011-10-04 22:00 (Reply)
Well friend...you did good! We all have similar feelings and I feel lucky! I took back a bunch of randoms that I picked up in a sweep to just "get stuff". BUT it is just stuff and that is why I love you! Always keeping it real. XO
#14 Mandy @ in the fashion lane (Homepage) on 2011-10-05 02:25 (Reply)
I unfortunately didn't get anything at all. I may start checking Target again for returns, but I'm basically over the whole Missoni/Target debacle. I've read those striped pumps are not comfortable at all. I'm now looking forward to Jason Wu.
#15 Brenda on 2011-10-05 12:53 (Reply)
I got a makeup case and the flats, but still haven't used either because I'm not 100% certain I'm keeping them. For the quality, the stuff seemed kind of overpriced to me. Guess I'm one of the few who felt this way, all that's left at my Target is shoes.
#16 Sara (Homepage) on 2011-10-05 20:45 (Reply)
This isn't my favorite collection, but I'm pretty excited that high-end designers are pairing with lower-priced stores. Consumers win!
#17 K (Homepage) on 2011-10-05 22:50 (Reply)
I too am still excited that designers are working with chains like Target, Kohls, etc. It was the people, not Target, that turned me off. To be honest, I have more luck with Target's Mossimo clothing on a regular basis. It would take A LOT more than the Missoni mishap to make me boycott Target. Lol!
#18 jen_cam on 2011-10-06 19:14 (Reply)
I think I got everything I wanted except the towels, but I'm kinda over those at this point.

Now I'm looking for things I didn't know I wanted lol. I've got my eye out for the multi-color suitcase which I came across once but couldn't justify the purchase. But now I find myself really wanting it. And I would love to get my hot little hands on an espresso set.
#19 amarie on 2011-10-07 11:20 (Reply)
Leave a comment