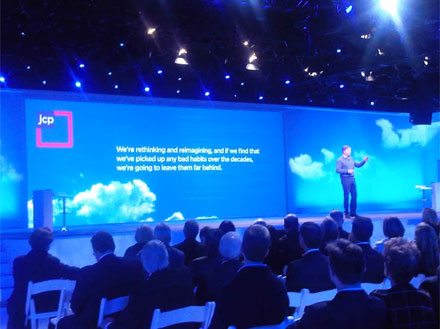 This morning JCPenney unveiled its ambitious plans to become "America's Favorite Store" with a new logo image, pricing, and promotion strategy including a partnership with Ellen DeGeneres. I watched the presentation via web conference to get the scoop.

"We're not here to improve, we're here to transform" said new JCP CEO Ron Johnson, who along with president Michael Francis, a former top Target executive, have been working to redefine the brand.

Starting February 1st, you'll begin to see the changes. JCPenney is rolling out a new pricing strategy and return policy called "Fair and Square" to simplify things for shoppers. Hallelujah!

They'll be going from 580 promotions in 2011 to just 12 in 2012, accompanied by fresh catalogs and other promotional materials.

The merchandise will also be changing. One such change: JCPenney announced it's teaming up with designer Nanette Lepore for a juniors diffusion line called L'Amour by Nanette Lepore. Love her!

By August 1st, JCPenney will start rolling out mini "shops" within the store. By 2013, they will launch a new retail concept called Town Square. By 2014, they'll have a whole new prototype for the store and by 2015 every store will be completely transformed.

I think these changes will be absolutely amazing for JCPenney shoppers if all goes according to plan. JCPenney was taking baby steps with their designer collabs (like Olsenboye, Nicole Miller and MNG by Mango) but we all know their stores felt stale and antiquated. I hope they overhaul their website, too. It won't be easy but I can't wait to see these changes take effect. How about you?

Previous Post Next Post
Comments
I am so excited for this! Every now and then I find something great at Penney's, but my local store is so outdated that it's kind of depressing to even venture inside. Looking forward to seeing these changes implemented.
#1 Sara (Homepage) on 2012-01-25 13:30 (Reply)
I started going into JC Penney when they teamed up with MNG by Mango, and have gotten some really great pieces on sale. I can't wait to see the changes.
#2 Brenda on 2012-01-25 16:24 (Reply)
I like the concept, but apparently some associates have lost their jobs because of their new promotion campaign. It's not confirmed, however. I'm excited for the change. But it that's true, then I don't know how I would feel about it then considering I worked in retail for 7 years.
#3 Elizabeth (Homepage) on 2012-01-26 14:18 (Reply)
I am an associate. Yes some associates have lost their job but that is because they refused to go to another team. Every pricing associate has lost their job but they were given another place in the store to go. Obviously some would have to take a pay cut but that's the best the company could do. As an associate I'm extremely excited about all the changes. It's gonna be great for shoppers.
#4 Nicky on 2012-01-28 18:28 (Reply)
Leave a comment