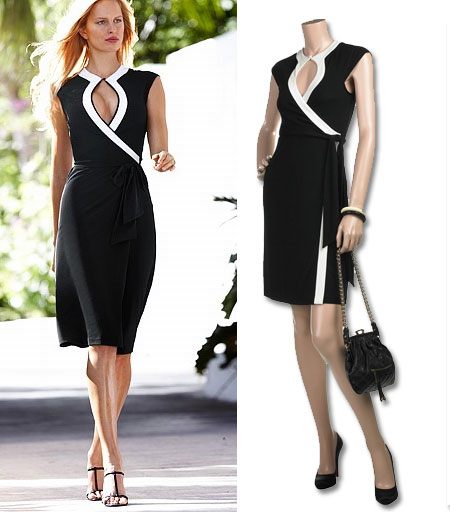 Looks like Forever 21 isn't the only one knocking off Diane von Furstenberg's covetable designs. For sleek sophistication with a graphic edge, take your pick of Victoria's Secret version of this black and white wrap dress (left) or Diane von Furstenberg's (right). I'd say go for the original, on sale now for the reasonable price of $182 at Net-a-Porter.com.

Which would you buy? The original? The knock-off? Neither?

Previous Post Next Post
Comments
Unfortunatey, I would still consider $70 too much for me. However, that is one hot dress! I love it! Other than a tiny details, from what I can see its a pretty good knock-off!
#1 Quarterlife Girl (Homepage) on 2008-05-21 10:36 (Reply)
This time, I'm going to have to go with neither. Although I usually love DVF wrap dresses (especially those with her signature prints), I don't find this dress very flattering. One would have to have perfect or twiggy arms to pull off the cap sleeve and the center cut-out is too large. It's just not demure enough for me. That being said, I'm impressed with VS' imitation, but I would check on the quality of the item. Often, their designs look great in the catalog and then arrive in flimsy fabrics that pill and fall apart, even when taken care of properly.
#2 Katie on 2008-05-22 11:44 (Reply)
Leave a comment