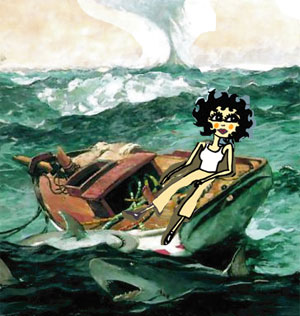 Shipwrecked! Or, the story of how The Budget Babe's International Travel Advisor Fifi LaMode almost ended up as shark bait. —TBB

by Fifi LaMode
When you go on a regular vacation and it rains, you open your umbrella and keep plodding along. When it rains at sea, it's a bit more complicated. After a couple of days of pleasant, relatively uneventful sailing, we were given a route going northeast and told it would take around 4 hours. Unfortunately, we'd be sailing against the wind, so we'd have to tack a lot. (Tacking - remember? It's where you go back and forth in a zigzag instead of straight ahead.) Also, the waves were about 12 feet high. What started out as a choppy ride turned really nasty when the rain started. (Of course I left my rain poncho on the kitchen table, where it really came in handy, right?)

So we have howling winds, 12 ft. waves, pounding rain, and one big fat crybaby of a Fifi. After 5 hours and no closer to port than we were 3 hours ago, I totally freak, like in shock. I'm shaking, crying, blubbering, you name it. Fortunately my husband is a few notches up on the sanity scale and insists no harm will come to us. I put on my life jacket just in case and have visions of me as Kate Winslet on the raft in "Titanic." Then I get in a bad mood - self-pity does that to you - and blame my husband for all of this, since the vacation was his dream holiday, not mine. He asks what I want him to do. I order him to forget sailing as a sport today and turn on the darned motor and get us to port. He meekly complies.

Now we're making headway. Then the land disappears. All around there is only sea. I'm thinking, "Now the Giant Sea Monster comes out of the water and swallows us up!" and proceed to pray to God, Neptune, St. Elmo, Our Lady Star of the Sea, anyone with control over our fates, not to let us hit rocks and die. The captain (hubby) assures me we won't hit rocks and will get to port safely. I feel I've underestimated his sailing skills, since he's steeri ng ahead when he can't see anything in front, side or behind him. I ask how he can be sure. He replies "I have GPS." Thank you, Technology Deity!

Anyhoo, we spot the harbor at Marina Cay, drop anchor and, after drying off as much as we can, head out to the bar - where else after such an ordeal? We get into the dinghy, only to have the motor die on us as soon as we disconnect ourselves from the boat. We paddle frantically but the current's taking us out to sea. EEK. This is scarier than the storm. Then two guys in another dinghy, one of whom looks like ZZ Top, help us. In the pouring rain we head for the Sunset Bar, where there's a Singing Pirate (He's a hippie who has a pirate ship in the harbor and he sings - and he's quite a friendly pirate too). That's what they call him, and his repertoire consists of sea shanties, and some funny songs and poems he's written. After listening to some music we head to Pusser's Restaurant and have some really good food and another drink. There's laughter all around and everyone's glad they made it through the day. The per il is over. We're safe in port.