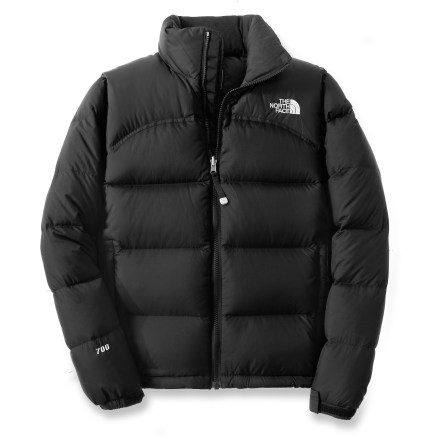 When I was in high school, North Face fleece and puffy jackets were All The Rage. I used to play a game with one of my friends called "spot The North Face" in which we'd sit in the hallway between classes, or camp out in, say, the yearbook office (yeah I'm still a nerd, so what?) and count the many North Face logos on students as they passed. 38, 39, 40, etc. Fun game, huh. So anyways, North Face used to be the coolest affordable luxury known to teens, tweens, the college crowd and beyond. North Face ranked highest on the outdoor-sports wear totem pole, with brands like LL Bean, Eddie Bauer and Land's trailing waay behind as far as the coolness factor was involved. North Face's only rival was the equally expensive Patagonia brand.

That was then, this is now. I still see North Face being sported by a lot of girls, oftentimes paired with Uggs and a Coach purse. Which isn't to say it isn't "cool" anymore, because I think North Face has done a good job of maintaining it's image as a high-quality, dare I say practical performance brand. In doing so, it has remained on the short list of the cold-weather dwelling fashionable set. But like most "cool" things, I would argue that Northface no longer commands the attention it once did. I should add that I myself have never owned a North Face product, but friends who do swear by the comfort, warmth and style that North Face provides.

Oh, but would I drop $199 for the jacket above? I think not. Would I wear it if I got it as a gift? Of course. I love functional outerwear regardless of the label, which is why I have to give Northface a definitive, cough, "Sure, why not."

Previous Post Next Post
Comments
I think Northface is definitely a marketable brand and they do have pretty good quality, it's warm and doesnt look like a ghetto bubble jacket(most of the time)

But to me I just cant seem to match it with a lot of things I wear, especially shoes.. During the winter the staple products for me are boots and coats, and those two NEED to match. I have a lot of high heeled boots and it just wont ever go together..
but needless to say it is a great jacket for winter..CASUAL jacket
#1 Neira on 2008-11-05 08:01 (Reply)
i shared a similar point of view in high school about north face and clearly not much has changed. i love this.
#2 Cupcakes and Cashmere (Homepage) on 2008-11-05 09:53 (Reply)
North Face was the first to make really wearable down parkas - like longer ones that are actually tailored a little to a woman's figure. This is only within the past 5 years, mind you, but they were the first ones I noticed to jump on that bandwagon. And I've bought my same Metro coat from them twice I love it so much. Gotta give a yea for quality, comfort, and warmth.
#3 Sal (Homepage) on 2008-11-05 10:03 (Reply)
my personal style is glam and a bit trendy, expensive classic pieces mixed with cheaper trendy fun pieces and access. i bought my black (and then a bubblegum pink) north face coats in college. they are still, at 7 and 5 years old, one of the most used, most loved items in my casual winter wardrobe. they still look brand new, they are WARM! and super SO cute with skinny jeans and frye harness or ugg boots. splurge on this if you wear casual alot. it's not a solve-all-fashion dilemma coat, you'll need a dressy black/colored wool coat too, but it is a well-worth-it splurge. this will be my black NF's eighth winter, and it still looks new! LOVE em. the quality and cuteness can't be beat. and something can be said for being warm!
#4 rachelle (Homepage) on 2008-11-05 10:11 (Reply)
I love my northface coat- It is the only one I have been wearing for years now, and nothing has compared to the warmth and quality that this product offers. It was an investment from day one, but its totally worth it and I would do it all over again! My dad also loves his North face and he's a big outdoors type- he says nothing beats the warmth and protection it provides him!
#5 Peaches on 2008-11-05 10:55 (Reply)
i'm a college freshman and EVERYONE has north face fleece jackets and backpacks. we have a game here to spot the "ultimate girl" wearing tights, uggs, northface, & some other brand lol
#6 liz on 2008-11-05 11:31 (Reply)
I've never been a big fan, and honestly haven't seen it around at home or at school. I guess it's because it just doesn't get that cold where I live. So maybe that's why I wouldn't pay that much for it. Although I do have a really insulated jacket for about $120...but I get cold easily and it was a gift, haha

#7 Celeste (Homepage) on 2008-11-05 12:07 (Reply)
I would invest in my own North Face fleece (personally, never a puffy jacket like that picture!) if I actually "dressed down" enough to get use out of it. I don't want to drop over $100 for something I'll only wear a few times. I'd rather just get a Columbia for $25. That being said, the North Face quality is probably worth the extra money, if you get the use out of it.
#8 Brittany on 2008-11-05 12:08 (Reply)
I give North Face a big ol' "meh." It was a big brand when I was in high school and college, too, and I never owned one either. I'm sure their products are warm and well made, but I think they look really generic. Last winter, I bought a DKNY down coat that is much chicer, very warm (it helped me survive Milwaukee's record-breaking snow) and -- surprise! -- cheaper than any North Face.
#9 Nikki W. on 2008-11-05 12:26 (Reply)
i don't really care for Northface - esp that puffy jacket
#10 miss on 2008-11-05 13:39 (Reply)
Gosh I feel old.When I was in high school we played, "Spot the Members Only jacket." And how scary that THOSE are back in vogue. North Face. This brand is QUITE prevalent among SUV driving, latte sipping suburban moms where I live in the midwest. I've never owned one, but investing in a down-filled puffy jacket is on my list of things to do before the snow starts flying...maybe I'll check ebay for one...because come to think of it, I do drive an SUV, sip lattes and live in the suburbs. Oh the horror.
#11 BarkingDogShoes (Homepage) on 2008-11-05 14:17 (Reply)
I would consider getting one. Instead we have invested in Land's End down here in this household and it fares pretty well. OMG, Member's Only brand?-wow, memories...
#12 Real Style Real people (Homepage) on 2008-11-05 14:31 (Reply)
I'd wear it alright. That is, if it was the only thing I had...to take out the trash!
#13 Debs on 2008-11-06 14:23 (Reply)
Nay...noooo pls. I see this type of Northface jackets everywhere in the same color with the same freaking logo screaming on the breast side....from students to bums to hotdog sellers to corporate executives. There are so many warm puffy jackets --as warm as Northface-available in the market. In fact, I've got one--it's an Esprit with a toggle-like button front.
#14 bingkee (Homepage) on 2008-11-06 16:09 (Reply)
I'm about to buy North Face jackets for myself and my husband. This will be our first winter in Chicago. I considered LL Bean and such, but the fit and look just isn't very modern for 20somethings. Their jackets are so warm and resistant to harsh elements, and often lightweight. However, I don't like the puffy jackets.
#15 Jade on 2008-11-08 00:15 (Reply)
i bought one for my daughter about 5 years ago and she's still wearing it. the great thing about them is that you can wear them inside (stores, movie theaters, etc.) and not get all sweaty like with the cheaper brands. because it's real down it adapts to your body temp. falls under "classic" in my book.
i like my butt covered in winter so i prefer the longer ones, especially here in the midwest where winter lasts a looooong time!

#16 maggie z on 2008-11-08 17:37 (Reply)
i bought a north face when i was in high school and i'm about to graduate from college, and i'm still wearing the same jacket. i love it. it wears great, it washes great, and it's warm! i have the fleece one that snaps into the rain coat (which i also got a few years ago after discover how much i loved my fleece)

the real "money statement" where i'm from is "Mountain Hardwater" or something like that... they're just like northfaces, but more expensive. i never saw anyone in those until i got to college with executive's daughters, frat boys, and such.