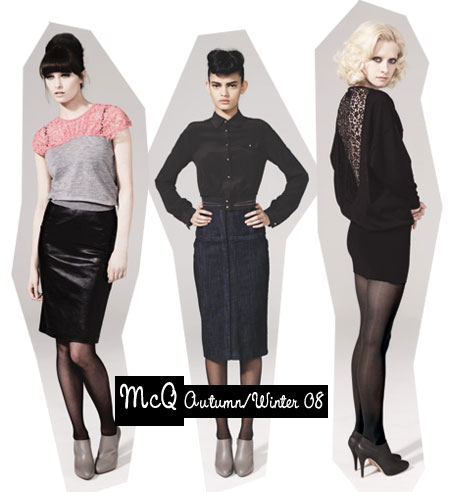 This is beyond thrilling: In March, Alexander McQueen will kick off Target's new Designer Collaborations with his Alexander McQueen Collection At Target.com, a version of his secondary line, McQ. Whereas Target's Go International focused on young or emerging designers, Designer Collaborations will bring established designers to the (slightly older) masses.

Here's what we can expect to see from the genius that is Alexander McQueen:


"Participating designers will draw inspiration from a muse, creative element or collaborative partner. McQueen chose as his muse Leila Moss, the lead singer of The Duke Spirit, a British band known for mixing noise rock and grunge in the late Eighties and early Nineties. Moss’ style gave the line its rock ’n’ roll-punk vibe and hip-Brit accents." [via WWD]

While I am ecstatic over the prospect of owning something even remotely designed by McQ, I can't help but think it's a little...embarrassing, no? For him. Not us. Is it the money? The exposure? Both? I'd love to pick his brain over this. Or at least talk to the sales rep who sold him on this brilliant pitch. (I'm not complaining, and you certainly don't have to convince me of the virtues of budget fashion, I'm just curious.)

[Above: Looks for the McQ Autumn/Winter 2008 collection--NOT Target. But I could totally see elements from these looks translated to budget fashion, couldn't you?]

Posted in: Budget Fashion, Off the Rack, Target

I'm getting ready to start putting money aside so I can buy every single piece in this target collection. I hope this collection will be released in the US. I believe some major designers like Stella McCartney, Alice McCall, Zac Posen and have already done collection for Target in Australia if I'm not mistaken.

I think its a smart, smart business move on his part and I believe his apparel company has investors to answer to now - so yes, its always about the money. Isaac Mizrahi made millions with his collaboration with Target over the years. Target is a very unique animal in the big retail chain market. No shame in this to me.

I'm so glad that they are bringing more "grown up" / guest-designer options to Tarjay. Thrilled beyond words!!
#1 budgetchic (Homepage) on 2008-11-06 09:10 (Reply)
Hey Budget Chic,
Yes, I'm pretty certain this collab is for the U.S. I remember when images of Zac Posen's collection for Australia were floating around the web, I was sooo jealous.

You raise some really good points. Sometimes I forget that it's us budget babes who keep these designers in business. A line at Target ensures McQueen will be able to continue bringing his artistic vision to life!

#1.1 The Budget Babe on 2008-11-06 20:01 (Reply)
I'm not sure why this would be embarassing for McQ, maybe he sees this as a great opportunity to do something a little different than he can for his established lines, something just cheaper and fun that won't be very taxing since it's a one-off collection. Plus, seeing how much exposure the other designers get, why wouldn't he want to do it?
#2 Sandy (Homepage) on 2008-11-06 10:35 (Reply)
Not an embarassment at all. Designer collections have sold out within days at H&M (remember Stella McCartney - I think that was out within hours). And with the departure of Isaac *sniffle*, we will need another headline name to continue to return to Target. Heck, Norma Kamali designs a line for Walmart and Vera Wang, queen of the wedding dress, designs a budget-accessible line - more and more designers are realizing the every day gals want to be fashionable too, but are conscious about our pockets.

With places like F21, Zara, and ASOS and lines like ABS making a killing by knocking off designer collections, designers are gettinig smarter and making their collections more affordable.

Anyone have any idea if this includes a men's collection, too?
#7 Eileen on 2008-11-07 02:21 (Reply)
There have been many established designers who have teamed up with Target w/o losing any of their high fashion reputations... aka Isaac Mizrahi, Sigerson Morrison, Botkier, Gryson, and so many others! So woop woop for McQ for the collaboration!!! I for one can't wait