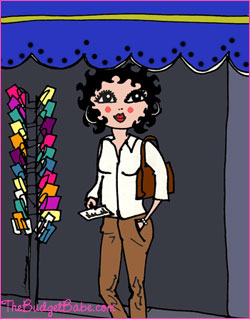 by Fifi LaMode
Łódź is located in central Poland, about 120 km from Warsaw. It's pronounced "Wooj", (the name is Polish for "boat") and used to be one of Europe's primary textile centers from the early days of the Industrial Revolution. Izrael Poznanski's factory at one time employed over 11,000 people. The city received privileges to encourage development and was labeled a special economic zone. Jews, Germans, Russians and Poles flocked there to get rich quick, earning Łódź the name "Ziemia Obiecana", or Promised Land. It was one of Europe's most multi-cultural cities.

This Golden Age ended with the world wars. After World War II, Łódź was the defacto capital of Poland, since Warsaw lay in ruins. The Jews were gone, so were the Germans and most Russians. It was still a major textile center, and designers like Yves Saint-Laurent and Daniel Hechter had their pret-a-porter collections made there; In the 70's and 80's you could find samples or seconds with their labels at the department stores and they were selling for a song (a Daniel Hechter corduroy jacket with flannel lining cost $12!).

The special economic zone still exists today and developers and investors are coming from around the world to take advantage of the tax breaks and financial incentives. Rumor has it that David Lynch fell in love with the place while filming there and plopped down a load of money for some project or other.


What about the factories? They were self-supporting towns, surrounded by villas and palaces where the owners lived, along with workers' houses which were considerably humbler. Scheibler's factory, Ksiezy Mlyn, stands empty, but the workers' houses are still occupied, and it's truly a step back in time to see them.

But Poznanski's factory has been developed into something extraordinary. The adjacent palace where Mr. Poznanski lived houses the Museum of the History of Łódź. The factory itself, however, has been gutted and part of it is filled with restaurants and cafes with names like Anatewka (Jewish), Wedel (yum, hot chocolate and truffles), Sioux (I hear it's akin to Tex-Mex, not from the Dakotas), etc. surrounding an open space with fountains where concerts, exhibits and other events are held regularly. A luxury hotel is planned for another section currently being gutted.

A shopping mall has been built at one end and it's very user friendly—2 levels with all sorts of Euro-shops like Cottonfield, Van Graaf, H&M, loads of shoe stores with the latest styles, and a fast food section with ample seating—even little sofas and coffee tables in one corner—and a very eclectic variety of foods ranging from Mickey D's to North Sea fish, Indian, Crepes, traditional Polish, and so on. In the mall itself are coffee shops, pastry shops and ice cream shops where you can get black currant, forest berries, and other exotic (to us) flavors.

Clothing prices are not cheap (this is Europe, remember?), but the food is very reasonable and tasty. Did I mention they also have a rock climbing place, and a few cinemas? This entire entertainment complex is called "Manufaktura" and its mix of old and new puts Łódź at the cutting edge of modern Europe in terms of blending tradition and history with modern life.

If you want to see Poznanski's factory as it existed originally, watch Wajda's film Ziemia Obiecana ("The Promised Land"). It was filmed in Łódź and used locals as extras. It's an excellent portrayal of the multi-culti nature of the city, with its resulting conflicts in a turbulent age, represented by 3 friends, a Pole, a German, and a Jew. It was nominated for an Oscar as Best Foreign Language Film in 1975.

Getting there: You can get to Łódź by train easily from Warsaw's Central Station, or fly there from several European cities (check out Ryanair, el cheapo flights if your dates are flexible).

Poznanski's factory-turned-mall reminds me of a place in Michigan City, IN. It's far from being an exotic locale, but there's an old factory there that was also converted into a shopping center. Really a fun place to shop, preserves a piece of history and makes for some interesting architectural details that you don't normally find in malls today.