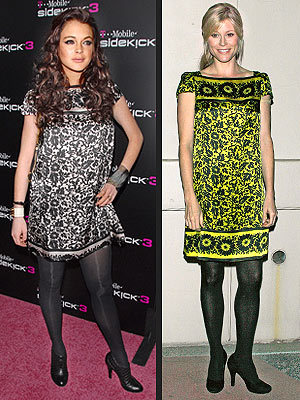 Designer Diane Von Furstenberg's studio filed a copyright-infringement lawsuit just weeks ago against Forever 21, claiming their $32 "Sabrina" dress is practically an exact copy—from the pattern right down to the measurements—of her $325 "Cerisier" dress.

We actually tried on the Forever21 version a couple weeks ago and well, it's hard to argue. They look pretty much identical, and both are even 100% silk.

So needless to say, we're shooting ourselves in the foot right about now for not buying the knock-off. Sure, it's wrong, but it's also one super cute, super cheap frock!

We immediately thought of checking Ebay, and spotted a dress (above) that looked like the Forever21 version, but claimed to be an original in the item description. Starting bid: $225. At that price, it better be the real thing, but who's to say that some unsuspecting buyer might be getting ripped off with a faux? All's we can say is shop smart and do your research if you're worried about getting taken for a ride. 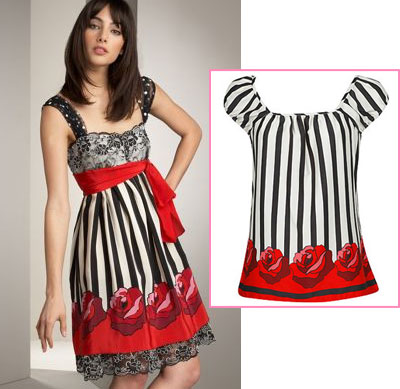 This may be the first lawsuit we've heard about against Forever21, but it's not the first time we've spotted a copycat design. Check out this Anna Sui Rose-Print Voile Dress, $541 at neimanmarcus.com (left) and this Maven Top for $17.80 that we saw at Forever21.com and in stores on the right. It's one thing to draw inspiration from another designer, but this takes the cake. Still, we're torn...it's cute, cheap and reminds us of one of our favorite expensive designers. What's a girl to do? More on this later.............

Previous Post Next Post
Comments
You are so right on. Unfortunately, my large breasts prevent me from looking good in something like this. Vive la Budget Babe!
#1 Jenifer Tomlinson on 2007-04-10 13:44 (Reply)
There are thousands of similar designs even between top designers. Rich buy the quality fabric and comfort fit, younger or less rich people buy less expensive ones with less quality products
Just because they look little bit similar doesn't mean that we are going to buy less quality fabric clothes
#2 Julie Julie on 2021-01-17 02:39 (Reply)
This dress pattern is that pretty and I wouldn't even want to wear it more than once maybe. It will stay in the closet after buy. I don't understand why dvf go nuts over their ugly dresses that doesn't even make you look pretty. I honestly think celebs who wore these patterned designs from DVD looks ugly so Forever 21 had similar ones that are ugly like dvf which wouldn't even sell much anyways
#2.1 Julie on 2021-01-17 02:44 (Reply)
Leave a comment